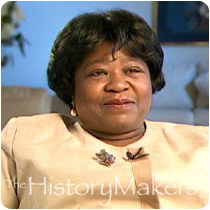 See how Dr. Doris Young-McCulley is related to other HistoryMakers

Doris Jean Young-McCulley was born on April 5, 1947 in Eutaw, Alabama to Lucille and Willie Young. The oldest of six children, Young-McCulley has served the medical needs of Chicago residents for over 25 years.

Young-McCulley has taught medicine throughout her career. She began in the Infectious Disease Teaching Program at Cook County Hospital in 1974, and she taught for six years as a professor of medicine at Northwestern University Medical School. She volunteers at South Suburban Hospice in Flossmoor, Illinois as a medical director and counsels children at Brave Heart. She has also been an administrator, serving as medical director for several medical centers, including: Provident Hospital, Bogan/ DuSable Adolescent Health Center and Crane Adolescent Health Center. Young-McCulley and her husband, Bernard McCulley, have been married since 1970.

See how Dr. Doris Young-McCulley is related to other HistoryMakers
Click Here To Explore The Archive Today!