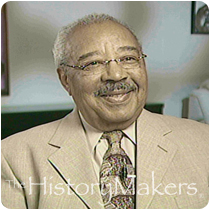 See how Dr. Delutha King is related to other HistoryMakers

DeLutha Porter Harold King, Jr. was born January 17, 1924 in Weir City, Kansas. His father DeLutha King Sr., a graduate of Lincoln University and minister in the C.M.E. church and his mother, Julia Banks King, a restaurant owner, moved King and his sister, Veatrice, to Kansas City, Missouri where they grew up. King attended the University of Kansas until he was drafted into the U.S. Army in 1942. From 1943 to 1945, he served in Europe in the all Black 43rd Signal Battalion as the company’s German interpreter.

King obtained a B.S. degree in zoology and english and a teaching certificate from Case Western Reserve University in 1952 while he worked full time for the U. S. Postal service since he was unable to find employment in his field when he returned from the war. He completed his M.D. degree in 1956; his internship in 1957 and his residency in surgical urology in 1961 at the Howard University College of Medicine and Freedmen’s Hospital in Washington, D.C. In 1956, King established the Student American Medical Association (SAMA), a chapter of the national A.M.A. at Howard University College of Medicine. He was the first person of color to be elected to the national office of SAMA Councilors. King was also the second recipient of the Daniel Hale Williams Award from the Association of Former interns and residents of the Freedmen’s Hospital.

King began his medical career as one of two urologists and was the only urologist of color in the state of Alabama at the V.A. Hospital in Tuskegee. He was Chief of Urology Services at the Veteran’s Administration from 1961 to 1965 and a Urology Consultant at John A. Andrew V.A. Hospital from 1966 to 1972. King moved to Atlanta and opened a private urology practice from 1966 to 1970 at 985 Hunter Street. In 1968, he moved his offices to 2600 Martin Luther King Jr. Drive, a multi-specialty building that he and eight other African American investors built. He operated his business out of 2600 Martin Luther King Drive, now a part of Grady Hospital Clinic, until 1999.

King’s career and accomplishments span over a forty-five year period. In 1971, he co-founded the Sickle Cell Foundation of Georgia, dedicated to the education, screening and counseling for Sickle Cell Anemia; the Atlanta Health Care Foundation in 1973; Metro Atlanta Health Plan Inc., the forerunner of the establishment of the Health Maintenance Organization (HMO) in 1980; Health First, the HMO in 1985 and the Health First Foundation which contributes grants to non-profit health-oriented organizations in Georgia in 1986. King has been certified and licensed to practice medicine and urology in the states of Alabama, California, Maryland and Georgia. He has been licensed since 1966 in Georgia. He is on the Board of Trustees and a member of the Medical Advisory Board at Morehouse School of Medicine where he held Faculty positions from 1980 to 1986.

His article, “Prostatic Calculi Associated with Priapism” is published in the Journal of the NMA (1952); “Parathyroidism and Calculi”, co-authored with Dr. Yancy is in the Journal of the SMA (1967) and editorial, “HMOs Come to Georgia—Responsible Cost Control Without Radical Change” in Urban Health (1979).

In 2001, King received the Honorary Doctor of Humanities Degree from Morehouse College. In 2006, he received an award for fifty years of practicing medicine. King is an active member of the American Urological Association, AMA, NMA, Georgia State Medical Association and Southwest Atlanta Urology Associates, Inc., an organization that he founded in 1970. He is a Fellow of the American College of Surgeons and a life member of Kappa Alpha Psi Fraternity, Inc. and the NAACP.

King resided in Atlanta with his wife, Lois Weaver King.

See how Dr. Delutha King is related to other HistoryMakers
Click Here To Explore The Archive Today!