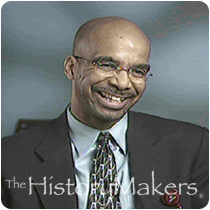 See how Dr. Clyde Yancy is related to other HistoryMakers

Professor of internal medicine and cardiologist, Dr. Clyde Warren Yancy, was born January 2, 1958, in Baton Rouge, Louisiana. Yancy's parents, Clyde Yancy, Sr., and Hilda V. Jones Yancy moved the family to Scotlandvillle, near the campus of Southern University, where his mother taught in the elementary and secondary lab schools. As a teenager, Yancy became an Eagle Scout, and played the saxophone with Southern University’s marching band at the Sugar Bowl. Yancy attended Southern University’s lab schools through his Southern High School graduation in 1976. Staying at Southern, Yancy earned his B.S. degree in 1978 and went on to Tulane University Medical School, where he graduated with his M.D. in 1982.

Yancy was a resident at Parkland Memorial Hospital in Dallas from 1982 to 1985; he was a University of Texas (U.T.S.W.) Southwestern Medical Center in Dallas fellow in cardiology from 1986 to 1989, and U.T.S.W. fellow in transplant cardiology from 1990 to 1991. From there, Yancy went on to become the Carl H. Westcott Distinguished Chair in Medical Research, and an associate professor in internal medicine and cardiology. A recipient of the Internal Medicine Outstanding Teacher Award in 1991, Yancy was also awarded the 1998 U.T. S.W. Outstanding Teacher Award by the class of 2001. Also in 2001, Yancy won the Outstanding Research Award and the Daniel Savage Award for Scientific Achievement from the Association of Black Cardiologists. The American Heart Association, for which he is an often-quoted spokesman, named Yancy National Physician of the Year in 2003. In 2006, Yancy became the medical director of the Baylor Heart and Vascular Institute in Dallas, and the head of the center's heart and lung transplant program.

The editor of Congestive Heart Failure, Yancy served on the editorial board of the Journal of Cardiac Failure. Having observed an emerging database of genetic variations in African Americans, which could explain their lower response to traditional heart-failure therapies, Yancy and others in the Association of Black Cardiologists proposed that in African Americans heart-failure is linked to chronic hypertension and should be treated in a different way than in whites. Yancy authored the Role of Race in Heart-Failure Therapy (2002). A widower, Yancy remained in Dallas where he raised two daughters.

See how Dr. Clyde Yancy is related to other HistoryMakers
Click Here To Explore The Archive Today!