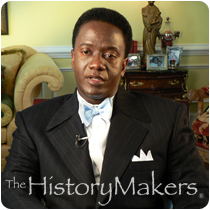 See how Dr. Christopher Leggett is related to other HistoryMakers
Donate Now

In 1992, Leggett became a physician at the Cardiovascular Laboratory in the Veterans Administration Hospital at the Emory University School of Medicine in Decatur, Georgia. In 1993, Leggett became an interventional cardiology fellow in the Department of Cardiology at the University of Alabama at Birmingham School of Medicine. During his fellowship, Leggett was under the tutelage of world leader and pioneer, Dr. Gary S. Roubin.

In 2002, Leggett was appointed by the United States Secretary of the Department of Health and Human Services to serve on the National Practicing Physician Advisory Council in Washington, D.C. for a four year term. In 2002, a Georgia State Senate Resolution honored Leggett for his contributions to society; in May of that same year, Leggett was the recipient of the President’s Award at Oakwood College for being an exemplary role model for Alumni. Leggett is the Director of Cardiology at Medical Associates of North Georgia and practices medicine at Northside Hospital – Cherokee in Canton, Georgia; St. Joseph's Hospital of Atlanta, Georgia; and Gwinnett Health System in Lawrenceville, Georgia.

Christopher Leggett was interviewed by The HistoryMakers on September 11, 2007.

See how Dr. Christopher Leggett is related to other HistoryMakers
Donate Now
Click Here To Explore The Archive Today!