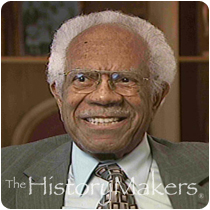 See how Dr. Charles Whitten is related to other HistoryMakers
Donate Now

Pediatrician and sickle cell anemia expert Dr. Charles Francis Whitten was born on February 2, 1922 in Wilmington, Delaware to school teachers Emma Clorinda Carr Whitten and Tobias Emmanuel Whitten. He grew up on Wilmington’s East Side next door to future jazz trumpeter Clifford Brown. Whitten attended Number 5 Elementary School and graduated fourth in his class from Howard High School in 1940. In 1942, he earned his B.S. degree in zoology from the University of Pennsylvania. Whitten then studied medicine at Meharry Medical College in Nashville, Tennessee and earned his M.D. degree in 1945 at age twenty-three.

After his internship at Harlem Hospital, Whitten worked as a general practitioner in Lackawanna, New York from 1946 to 1951.Whitten then served two years as a captain in the United States Medical Corps before returning to the University of Pennsylvania’s Graduate School of Medicine for a year of advanced study in pediatrics. In 1953, Whitten began a two-year residency in pediatrics at Children’s Hospital in Buffalo, New York. In 1955, he moved to Detroit, Michigan for a one year fellowship to study pediatric hematology under Dr. Wolf Zeltzer. Whitten became the first and only African American to head a department in a Detroit hospital when he was selected clinical director of pediatrics at Detroit Receiving Hospital in 1956. Whitten worked as an attending pediatrician at Children’s Hospital of Michigan from 1962 to 1999. He started teaching medicine as an instructor in pediatrics at Wayne State University in 1956. Whitten was named assistant professor in 1959, served as full professor of pediatrics from 1970 to 1990, and became associate dean of curricular affairs in 1976 and of special programs in 1992.

Whitten passed away on August 14, 2008 at the age of 86. He is survived by his wife, Eloise Culmer Whitten, an expert on pre-school reading. Together, they supported a number of worthy causes, including a clinic in Haiti.

Whitten was interviewed by The HistoryMakers on March 8, 2007.

See how Dr. Charles Whitten is related to other HistoryMakers
Donate Now
Click Here To Explore The Archive Today!