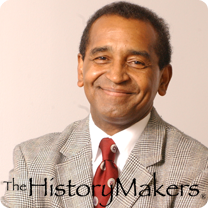 See how Dr. Charles Lovell, Jr. is related to other HistoryMakers

Medical doctor and epidemiologist Charles Lovell, Jr. was born on September 17, 1946 in Winston-Salem, North Carolina to Charles Lovell, Sr. and Rachel Lovell. After Lovell’s freshman year in high school, his family sent him to New York City, where he lived with his uncle James Floyd and his aunt Martha. Lovell attended Seward Park High School and after graduation, he was accepted and attended Harvard College in Cambridge, Massachusetts. After graduating Harvard College, Lovell went on to attend medical school at Columbia University College of Physicians & Surgeons in New York where he earned his M.D. degree in medicine. After graduating from Columbia University, Lovell interned at Harlem Hospital Center. In 1976, Lovell was named chief resident of Harlem Hospital and later went to the Atlanta-based Centers for Disease Control and Prevention’s Epidemic Intelligence Service [EIS], where he investigated national and local epidemics.

In 1978, Lovell opened his private medical practice, York Clinical Research and was also appointed assistant professor of clinical research at Eastern Virginia Medical School [EVMS]. That same year, Lovell worked with U.S. Rep. George William Whitehurst to enact legislation to include preventive health services as a part of Medicare. As a result, both Lovell and U.S. Rep. Whitehurst were awarded the American Lung Association’s Annual Award in 1981. In 1993, Lovell was the first African American to serve as president of the Commonwealth of Virginia’s Board of Medicine. In 2006, Lovell’s private practice was distinguished as a Cardiovascular Center of Excellence by the Consortium for Southeastern Hypertension Control in 2006. Lovell divided his time between his private practice and his medical initiative entitled, the 3 Diseases Project, whose mission is to diagnose and treat hypertension, diabetes and high cholesterol through the utilization of cutting edge technologies. In 2007, Lovell was awarded Dominion’s Strong Men & Women: The Series, which highlights African-American men and women whose accomplishments and determination demonstrate true excellence in leadership. Lovell is a former member of the National Vaccine Advisory Board. He is a current member of Sigma Pi Phi fraternity and the Sigma Xi scientific research society. Lovell’s wife is Barbara Lovell and they have one daughter, Sarah Rachel.

Charles Lovell, Jr. was interviewed by The HistoryMakers on February 5, 2012.

See how Dr. Charles Lovell, Jr. is related to other HistoryMakers
Click Here To Explore The Archive Today!