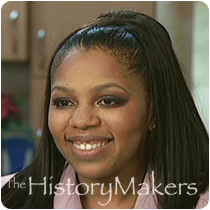 See how Dr. Catrise L. Austin is related to other HistoryMakers
Donate Now

Dentist and entrepreneur Catrise L. Austin was born on May 2, 1970, in Flint, Michigan. She discovered her passion for dentistry at age 15 while visiting the orthodontist for braces. Austin was voted prettiest smile in 1988 at Flint Central High School, where she received her diploma that same year. Austin went on to receive her B.A. degree in psychology from the University of Michigan in 1991 and her Doctorate in dental surgery from the University of Maryland in 1996. Moving to New York in 1996, she completed her advanced dental training at Brooklyn’s Lutheran Medical Center.

Working as a dental hygienist motivated Austin to start her own practice which she did in 1998, becoming the Chief Operating Officer of VIP Smiles, a successful New York cosmetic and sports dental practice. The practice boasts an impressive and loyal following, including such entertainment luminaries as Isaac Hayes, Toni Braxton and Missy Elliot. In addition, The Discovery Health Channel, The Queen Latifah Show, and The Ricki Lake Show have used her services.

Austin has broken gender and racial boundaries and established herself in a field traditionally dominated by men. She is one of the most well-known and highly regarded dentists in the entertainment industry. The Network Journal named her one of the 25 Most Influential Black Women in Business in 1999. She holds professional memberships in the American Dental Association, New York County Dental Society, American Association of Women Dentists, American Academy of Cosmetic Dentists, and the Academy of Sports Dentistry. She also holds social memberships in the National Association of Black Female Executives in Music & Entertainment, the Black Sports Agents Association and Alpha Kappa Alpha Sorority.

See how Dr. Catrise L. Austin is related to other HistoryMakers
Donate Now
Click Here To Explore The Archive Today!