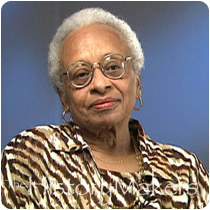 Favorite Color:
Black, Blue
Favorite Food:
Watermelon, Fruit
Favorite Time of Year:
Fall
Favorite Vacation Spot:
West Virginia Mountains, Hawaii
Favorite Quote:
Do Unto Others As You Would Have Them Do Unto You.

Favorite Color:
Black, Blue
Favorite Food:
Watermelon, Fruit
Favorite Time of Year:
Fall
Favorite Vacation Spot:
West Virginia Mountains, Hawaii
Favorite Quote:
Do Unto Others As You Would Have Them Do Unto You.

See how Dr. Billie Wright Adams is related to other HistoryMakers

Medical professor and pediatrician Dr. Billie Wright Adams was born in Bluefield, West Virginia. Her father, William Morris Wright, was a country doctor who accepted chickens and potatoes in lieu of cash for his services. Adams received her B. S. degree from Fisk University in 1950. The following year, she received her M. S. degree in zoology from the University of Indiana in Bloomington. Intending to begin a career in research, but not wanting to be isolated in the laboratory, Adams enrolled in medical school at Howard University. After receiving her M.D. degree in 1960, she focused her efforts on pediatric medicine, completing her residency at Cook County Children's Hospital. She then completed a fellowship in hematology at Cook Country Hospital from 1963 to 1964.

From 1964 to 1967, Adams served as a research associate in the Department of Hematology at the Hektoen Institute for Medical Research. She began teach as a clinical instructor at the Chicago Medical School in 1967. Adams served as an attending at Michael Reese Hospital in the pediatrics department in 1970 and then was appointed chief of the Pediatric Hematology Clinic at Mercy Hospital. Two years later, she joined the faculty of the University of Illinois in the Department of Pediatrics as a clinical assistant instructor. In 1976, she was promoted to clinical associate professor. Adams became the project director in 1980 of a United States Department of Health and Human Services funded grant for a Pediatric Primary Care Residency Program at Mercy Hopsital. From 1981 to 1987, Adams served as the Assistant Program Director of Mercy Hospital & Medical Center’s Department of Pediatrics. Her professional responsibilities over the years have also included acting bureau chief of the Chicago Department of Health, Bureau of Community and Comprehensive Personal Health; former president of the Chicago Pediatrics Society and coordinator of a medical student training program at Cook County Hospital.

Adams was recognized many times for her dedication to pediatric care. In 1997, the Illinois Chapter of the American Academy of Pediatrics named her Pediatrician of the Year. She received the 1999 Chicago Medical Society Public Service Award and the 2012 Timuel Black Community Service Award from the Jazz Institute of Chicago. Adams served on the board of the Ounce of Prevention Fund. Adams is the widow of Frank Adams and the mother of Chicago attorney Frank Adams, Jr.

Dr. Billie Wright Adams was interviewed by The HistoryMakers on September 17, 2002.

See how Dr. Billie Wright Adams is related to other HistoryMakers
Click Here To Explore The Archive Today!