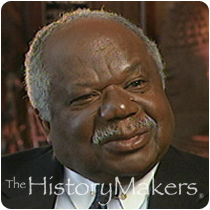 Favorite Color:
Navy Blue
Favorite Food:
Breakfast Foods
Favorite Time of Year:
Summer
Favorite Vacation Spot:
Martha's Vineyard, Massachusetts
Favorite Quote:
When there is a will, there is a way.

Favorite Color:
Navy Blue
Favorite Food:
Breakfast Foods
Favorite Time of Year:
Summer
Favorite Vacation Spot:
Martha's Vineyard, Massachusetts
Favorite Quote:
When there is a will, there is a way.

See how Dr. Beny J. Primm is related to other HistoryMakers

Dr. Beny Primm was born on May 28th, 1928, in Williamson, West Virginia, the son of an educator and a mortician. He and his brother Jerome were raised in a home in which education was emphasized, and in 1941, Primm's mother, who was the principal of a local elementary school, moved the family to the Bronx, New York so that her sons could attend integrated high schools.

From an early age, Beny Primm wanted to be a doctor, and after four years at DeWitt Clinton High School in the Bronx, he received a basketball scholarship to attend Lincoln University. There, Primm was surrounded by bright and driven students, and six of the members of his basketball team would go on to become doctors or Ph.D.'s. He left Lincoln after two years, unable to cope with the school's rigorous academic pressure, and returned to West Virginia where he graduated from West Virginia State University. After several years in the service as a paratrooper, Dr. Primm returned home with an injury, and was unable to get into medical school in the United States. Having studied German in college, he decided to apply to the University of Heidelberg, and was accepted in 1953. After a year at Heidelberg, Primm transferred to University of Geneva, in Switzerland, and received his M.D. in 1959.

In 1969, he helped to found the Addiction Research Treatment Corporation and has been the executive director ever since. A.R.T.C., located in Brooklyn, New York, is one of the largest minority non-profit community-based substance abuse treatment programs in the country, treating over 2,300 men and women from underserved communities.

Since 1983, Dr. Primm has also been president of the Urban Resource Institute, an umbrella organization that supports various community-based initiatives and social service programs for battered women, the developmentally disabled, substance abusers, and those infected with HIV and AIDS. A national authority on drug addiction, Dr. Primm has served as an adviser to the National Drug Abuse Policy Office since the Nixon administration.

Dr. Primm is also internationally recognized as one of the world's foremost experts on HIV and AIDS, an area of study he pursued initially due to the disease's intimate relationship with addiction and the epidemic levels of infection among I.V. drug users. He has served on the Presidential Commission on the Human Immunodeficiency Virus Epidemic, and has represented the U.S. at numerous international conferences, including the World Health Organization's conference in Geneva and the International Conference for Ministers of Health on AIDS prevention in London.

Widely published, he has written over thirty articles on addiction, which have appeared in numerous medical texts and journals. He has also delivered speeches, lectures and keynote addresses around the world, and has been a visiting lecturer at a dozen different academic institutions, including Columbia University, Harvard University and New York University.

See how Dr. Beny J. Primm is related to other HistoryMakers
Click Here To Explore The Archive Today!