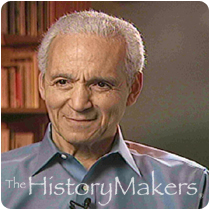 See how Dr. Augustus A. White, III is related to other HistoryMakers
Donate Now

Prominent orthopedic surgeon Dr. Augustus A. White III was born in Memphis, Tennessee, the son of a doctor and a librarian. After attending segregated schools in Memphis, White graduated from the private Mount Herman School in Northfield, Massachusetts, in 1953. White completed his pre-medical studies at Brown University in 1957, and in 1961 was the first African American graduate of the Stanford University School of Medicine. Receiving his Ph.D. degree in orthopedic biomechanics at the Karolinska Institute in Sweden, White became the first African American surgical resident at the Yale-New Haven Hospital; he also served in Vietnam as a captain in the U.S. Army Medical Corps, earning a Bronze Star.

Specializing in care of the spine, White worked at Harvard Medical School as a professor of orthopedic surgery, and as the Ellen and Melvin Gordon Professor of Medical Education. For thirteen years, White served as chief of the orthopedic surgery department at Beth Israel Hospital in Boston; he also founded the academic orthopedic program at the Beth Israel Deaconess Medical Center.

A noted author in his medical specialty, White co-wrote (with Dr. Manohar M. Panjabi) Clinical Biomechanics of the Spine and Biomechanics of the Musculoskeletal System. White also wrote Your Aching Back: A Doctor’s Guide to Relief; Back Care; Advances in Spinal Fusion: Molecular Science, Biomechanics and Clinical Management; and Clinical Biometrics of the Spine, a standard reference book for orthopedists. In 2006, White was awarded the American Academy of Orthopaedic Surgeons Diversity Award for his life’s work, and his contributions to his field.

White met his wife, Anita, during his Ph.D. studies at the Karolinska Institute; the couple had three daughters.

See how Dr. Augustus A. White, III is related to other HistoryMakers
Donate Now
Click Here To Explore The Archive Today!