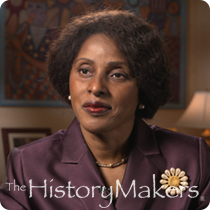 See how Dr. Arese Carrington is related to other HistoryMakers

Public health consultant Dr. Arese Ukpoma Carrington was born on July 16, 1958 in Lagos, Nigeria to Dora and Elisha Ukponmwan. Her great-great-grandfather, Oba Ovonramwen Nogbaisi, was the ruler of Benin from 1888 to 1897. Carrington and her mother were separated from her father during the Biafran Civil War, but the family later reunited. Carrington earned her M.D. degree from the University of Ibadan, Nigeria in 1980.

Carrington briefly served as a medical officer for the Nigerian Airports Authority before establishing a private practice. In 1986, she founded Goldline Limited, a commercial company providing consulting and promotional services to multinational companies and foreign non-profits. She also founded Health and Medical Services that same year to consult on issues of preventive healthcare in the workplace. Carrington enrolled in a master’s program at the Harvard School of Public Health, where she studied in the Department of Population and International Health. Graduating in 2000, she was chosen as the graduate orator at the commencement ceremony. Carrington then became the associate director of government relations and community programs for Harvard’s AIDS Prevention Initiative Nigeria (APIN), helping to secure a health grant from the Bill & Melinda Gates Foundation, the largest at that time. She also authored Malaria in Nigeria, published in the Fall 2001 issue of the Harvard Health Policy Review. In 2004, Carrington worked for the Pan African Health Foundation, which partnered with the Nigerian government to establish an auto-disable syringe factory in Port Harcourt. In 2006, she and her husband, U.S. Ambassador to Nigeria Walter C. Carrington, founded Africana Consultants USA to advise on issues of public health and investment promotion.

Carrington served as vice president of the board of directors of the United Nations Association of Greater Boston. As a visiting committee member for the Arts of Asia, Oceania and Africa at the Museum of Fine Arts in Boston, she facilitated the development of the Benin Kingdom Gallery. She also served on the trustees’ advisory board of the Beth Israel Deaconess Medical Center in Boston. In 2014, Carrington was the recipient of the Newton Human Rights Lifetime Achievement award, Massachusetts State Senate Official Citation, and the Massachusetts House of Representatives Official Citation in recognition of being a life-long advocate of Human Rights.

Dr. Arese Carrington was interviewed by The HistoryMakers on October 20, 2016.

See how Dr. Arese Carrington is related to other HistoryMakers
Click Here To Explore The Archive Today!