Information about Dr. Annelle B. Primm 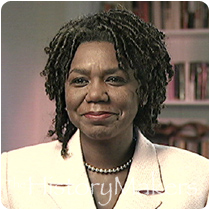 See how Dr. Annelle B. Primm is related to other HistoryMakers
Donate Now

Annelle Beneé Primm was born on January 26, 1956 in Geneva, Switzerland. Her mother was a music teacher and her father a physician. She lived in Switzerland until she was four years old while her father was attending medical school. After earning his medical degree, her father moved the family to his native New York. She grew up in the bedroom community of New Rochelle and graduated from New Rochelle High School in 1972.

Although she received an academic scholarship to the University of Virginia, Primm decided to attend Harvard-Radcliffe in Boston. She earned her bachelor's of arts degree in biology in 1976. Despite taking off the second semester of her junior year to help care for her mother who was dying of cancer, she graduated with her class. In 1980, Primm earned her medical degree from Howard University. After completing her residency in psychiatry at Johns Hopkins in Baltimore, she earned her MPH degree from Johns Hopkins School of Public Health in 1985.

While at Hopkins in 1985, she co-founded a program called COSTAR (Community Support Treatment and Rehabilitation), which provided in-home mental health treatment to patients. From 1985 until 1986, she worked as a psychiatrist at Provident Hospital in Baltimore. During this time she also worked as the director of the City Division of Springfield State Hospital, a Maryland psychiatric hospital. She also worked at Johns Hopkins Hospital from 1980 until 2004. She held a variety of positions at Hopkins including, staff psychiatrist, associate professor and the Director of Community Psychiatry.

In 1999, Primm produced a videotape called Black and Blue that highlighted depression in the African American community and encouraged minorities to seek treatment for mental illness. In 2001, she produced Gray and Blue, which helps senior citizens recognize and treat depression.

She lives in Baltimore, Maryland her husband, Herbert, and daughter, India.

See how Dr. Annelle B. Primm is related to other HistoryMakers
Donate Now
Click Here To Explore The Archive Today!