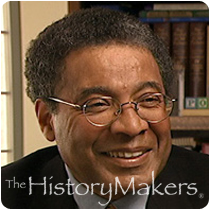 Favorite Color:
Blue
Favorite Food:
Potatoes
Favorite Time of Year:
Summer
Favorite Vacation Spot:
Caribbean
Favorite Quote:
It is better to have loved and lost than to never have loved at all.

Favorite Color:
Blue
Favorite Food:
Potatoes
Favorite Time of Year:
Summer
Favorite Vacation Spot:
Caribbean
Favorite Quote:
It is better to have loved and lost than to never have loved at all.

See how Dr. Alvin Poussaint is related to other HistoryMakers

Dr. Alvin Poussaint was born in East Harlem, New York, on May 15, 1934. When he was nine years old he became ill with rheumatic fever and was hospitalized for three months and spent two months in a convalescent home. Poussaint could do little but read while recovering, and it became a passion. After leaving the convalescent home, Poussaint's physical activities were restricted and so he took up quiet activities, like playing the clarinet. Poussaint began his background in science when he was admitted to New York City's competitive science-focused magnet school, Stuyvesant. After high school, he attended Columbia University and, in 1960, received his M.D. from Cornell University. Dr. Poussaint completed his residency at the UCLA Neuropsychiatric Institute and in 1964, received a M.A. degree from that same institution.

After completing his training in psychiatry, Poussaint chose to join the Civil Rights Movement as it was taking shape in the South. With the belief that racism was the core mental health problem for the African American community, Dr. Poussaint thought overcoming segregation would be more effective for the community than individual counseling. He joined a team of healthcare professionals as the Southern Field Director of the Medical Committee for Human Rights in Jackson, Mississippi, in 1965. In this position, he and his team provided medical care to civil rights workers and helped to desegregate health care facilities across the South. His commitment to civil rights did not end when he left Mississippi to join the Tufts Medical School faculty in 1967. At Tufts, Poussaint served as director of the psychiatry program in a low-income housing project, and he continues to focus on increasing public awareness on the need for improved race relations in America.

In 1969, he joined Harvard Medical School's faculty, where he remains today as a professor of psychiatry and Faculty Associate Dean for Student Affairs. Poussaint is also presently director of the Media Center at the Judge Baker Children's Center in Boston.

As one of the nation's preeminent psychiatrists and experts on race relations, Dr. Poussaint has written many articles and the books: Why Blacks Kill Blacks (1972), Raising Black Children (1992), co-authored with Dr. J.P. Comer; and Lay My Burden Down (2000), co-authored with Amy Alexander. He is most well known, however, for his regular contributions to Ebony magazine and his work consulting for numerous television projects including The Cosby Show and A Different World.

For his outstanding contributions to the medical field, he has been honored with numerous awards and honorary degrees. Poussaint was one of the founding members of Operation PUSH, and today lends support to the SCLC, NAACP, Urban League, and many community organizations.

See how Dr. Alvin Poussaint is related to other HistoryMakers
Click Here To Explore The Archive Today!