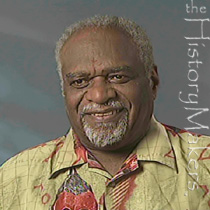 Negro Ensemble Company co-founder, actor, director, and playwright Douglas Turner Ward was born Roosevelt Ward, Jr. on May 5, 1930, in Burnside, Louisiana. Ward was a descendant of General Nathan Bedford Forrest, founder of the Ku Klux Klan; his great, great, great-grandmother, Elnora, owned as a slave by Forrest, bore a child with him. Ward’s parents, Roosevelt Ward and Dorothy Short Ward were field hands, but they owned their own tailoring business. Raised in New Orleans, Louisiana, and attending Xavier Prep High School, Ward graduated in 1946 at the age of sixteen. Ward entered Wilberforce University in 1946, where he performed in two plays, Thunder Rock and A Shot In The Dark, and discovered his ambition to be a sportswriter. When Wilberforce began to lose its accreditation in 1948, Ward transferred to the University of Michigan at Ann Arbor, where he played football in his freshman year; he would later quit the football team. In 1949, Ward decided that he wanted to leave college altogether; at the age of nineteen, he went to New York City.

In New York Ward became politically involved and worked as a journalist. Ward eventually decided to become a playwright and studied at the Paul Mann Workshop in New York City. In 1956, Ward began his off-Broadway career as an actor in Eugene O’Neill’s The Iceman Cometh; he went on to perform and understudy for a part in A Raisin In The Sun. In 1965, Ward, Robert Hooks, and Gerald Krone formed the Negro Ensemble Company; he made his playwriting debut that same year with the oft produced Happy Ending/Day of Absence. In 1967, the Negro Ensemble Company was officially opened with Ward serving as artistic director; some of the its notable productions include A Soldier’s Playand The River Niger, which became the company’s first play to go to Broadway. The River Niger eventually won a Tony Award for Best Play. Ward went on to write other plays, including The Reckoning and Brotherhood.

Douglas Turner Ward was interviewed by the HistoryMakers on April 28, 2010.

See how Douglas Turner Ward is related to other HistoryMakers
Donate Now
Click Here To Explore The Archive Today!