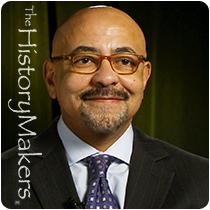 See how Douglas Holloway is related to other HistoryMakers

Television executive Douglas V. Holloway was born in 1954 in Pittsburgh, Pennsylvania. He grew up in the inner-city Pittsburgh neighborhood of Homewood. In 1964, Holloway was part of the early busing of black youth into white neighborhoods to integrate Pittsburgh schools. In 1972, he entered Northeastern University in Boston, Massachusetts as a journalism major. Then, in 1974, Holloway transferred to Emerson College, and graduated from there in 1975 with his B.S. degree in mass communications and television production. In 1978, he received his M.B.A. from Columbia University with an emphasis in marketing and finance.

Holloway was first hired in a marketing position with General Foods (later Kraft Foods). He soon moved into the television and communications world, and joined the financial strategic planning team at CBS in 1980. While there, Holloway became interested in the new field of cable television, and helped to develop the CBS Cable project. From 1982 to 1983, he served as the National Accounts Manager for Time, Inc.’s TV-Cable Week Magazine. He began working at USA Networks in 1983 and developed their affiliate relations program, becoming the president of the department in 1998. When NBC purchased USA Networks in 2004, Holloway was named president of cable investments and managed the joint venture companies of NBC, including AETN, Shop NBC, Peacock Productions, Weather Plus, and National Geographic International. From 2009 to 2011, he served as a corporate advisor to American Express and America One/One World Sports; and, in 2011, he became the president of multichannel distribution at ION Media Networks, Inc.

Holloway received the National Cable Television Association’s Vanguard Award for Marketing in 1997. He has also received the Lifetime Achievement Award from the National Association for Multi-Ethnicity in Communications, and was named one of Black Enterprise’s Top Ten Most Powerful Blacks in Hollywood in 2007. Holloway was named as one of Crain’s 40 Under 40, and has received both Columbia University’s Alumni Heritage Award and Emerson College’s Distinguished Alumni Award. In addition, he has been a trustee of Emerson College since 2002, is a member of the New York chapter of the Boule, and is a member of the Westchester Clubmen Foundation.

Douglas V. Holloway was interviewed by The HistoryMakers on December 13, 2013.

See how Douglas Holloway is related to other HistoryMakers
Click Here To Explore The Archive Today!