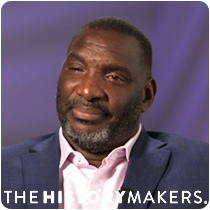 "Don't Look Back, They Might Be Gaining On You"

Football executive, coach, and player Doug Williams was born on August 9, 1955 in Zachary, Louisiana to Laura Williams and Robert Williams, Sr. He attended Chaneyville High School, where he initially trained as a linebacker and soon switched to quarterback. Upon graduating in 1973, he was recruited by Grambling State University in Grambling, Louisiana, where he was mentored by legendary college football coach Eddie Robinson. Williams received his B.S. degree in health and physical education from Grambling State University in 1977.

In 1978, Williams was selected 17th overall in the NFL Draft by the Tampa Bay Buccaneers, becoming the first African American quarterback to be picked in the first round. During his five years with the Tampa Bay Buccaneers, he led the team to the playoffs three times. Williams decided to the leave the Tampa Bay Buccaneers in 1983 to join the newly-formed United States Football League. After the United States Football League folded in 1985, Williams was recruited by the Washington Redskins the following year as a backup quarterback to Jay Schroeder. In the subsequent 1987 season, Williams replaced Schroeder as the starting quarterback. He then led the team to Super Bowl XXII, in which the Washington Redskins defeated the Denver Broncos 42-10. Williams, the first African American starting quarterback to win a Super Bowl, was named MVP with 340 passing yards and 18 of 29 passes completed. In 1989, Williams retired from the NFL and went on to coach at several schools at the high school and college level, including Northeast High School in Baton Rouge, Louisiana; the U.S. Naval Academy; and Morehouse College. In 1998, Williams succeeded his former coach Eddie Robinson as the head football coach for Grambling State University, a position he held until 2003 and again from 2011 to 2013. In 2017, Williams was named the senior vice president of player personnel for the Washington Redskins. He also served as a personnel executive for the Tampa Bay Buccaneers.

In 1988, Williams founded the Doug Williams Foundation, which awarded more than $100,000 in college scholarships in its first year.

In recognition of his accomplishments as a football player, Williams was inducted into the College Football Hall of Fame in 2001 and into the Tampa Bay Buccaneers Ring of Honor and the Washington Redskins Ring of Fame in 2015.