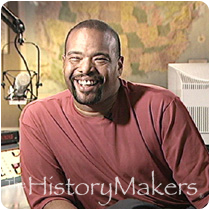 See how Doug Banks is related to other HistoryMakers
Donate Now

Radio personality Calvin Douglas Banks, Jr., was born in Philadelphia, Pennsylvania on June 9, 1958. His family relocated to Detroit when he was still young, and he attended St. John’s Lutheran School and Friends School there, graduating from Southfield High School in 1976. Banks became a popular disc jockey on Southfield High’s WSHJ when he was only fifteen. He was offered a full time job in Miami, but his mother wanted him to finish school, so Banks took a part time job at WDRQ in Detroit, where Bill Bailey mentored him. He was enrolled at the University of Michigan in 1976 before being lured by a $50,000 contract from popular Los Angeles’ KDAY, in 1977.

Banks’ career brought him briefly to Chicago, then back to KFI in Los Angeles. It was at KLAV in Las Vegas, where he did his first stint as a morning man. Moving to KDIA in San Francisco, Banks was then offered a substantial contract from WBMX (now WVAZ) in Chicago. Banks boosted the morning ratings from a 1.8 share to a 5.6 share. Enticed to join rival WGCI, Banks worked afternoon drive time, but soon returned to mornings from 1987 to 1994. Banks show with Harold Lee Rush and Bonnie DeShong became a radio institution in Chicago. Following a similar path as radio legend Tom Joyner, Banks signed a deal with ABC Radio Networks in Dallas to do a syndicated afternoon drive show, “The Doug Banks Show”. The show which targeted audiences 18 to 34 years of age, featured DeDe McGuire and CoCo Budda and Banks as the Urban Flava Creator. This show was heard by millions nationwide.

A recipient of numerous awards, Banks had a track record of being accessible to community organizations. In 2004, “The Doug Banks Show,” along with Russell Simmons, Hip Hop Summit Action Network spearheaded the One Mind One Vote campaign urging young people in the cities to vote. Banks lived with his family live in the Dallas area.

See how Doug Banks is related to other HistoryMakers
Donate Now
Click Here To Explore The Archive Today!