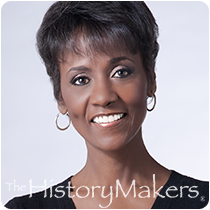 See how Dorothy Tucker is related to other HistoryMakers
Donate Now

Broadcast journalist Dorothy Tucker was born in Chicago, Illinois. She graduated from Austin High School in 1974, before attending Northwestern University as a communications major. While enrolled there, she became an intern at Chicago’s WBBM-TV in 1977. In the same year, after graduating, with honors, with her B.S. degree, Tucker was hired as a reporter at WMBD-TV in Peoria, Illinois. She became a reporter in Denver at KWGN and later a reporter and weekend anchor at WREG-TV in Memphis, Tennessee, in 1979, and went to KDKA-TV in Pittsburgh, Pennsylvania in 1981, where she reported and hosted an award winning talk show . Tucker returned to WBBM as a general assignment reporter in 1984. In 2009, Tucker began a weekly radio show, Customer Service, on WVON-AM.

She serves on the board of the National Association of Black Journalists’ Chicago chapter, and co-chaired the organization’s fundraiser for victims of Hurricane Katrina who have moved to Illinois since the 2005 disaster. Tucker is a member of Northwestern University's Council of One Hundred. She lives in Chicago’s Hyde Park neighborhood. Tucker is married to investment banker Anthony Wilkins, and has three children that all attend Ivy League universities: (Princeton University, Yale University, and the University of Pennsylvania).

She has been honored numerous times throughout her career. On two occasions, Tucker has won the Chicago Association of Black Journalists’ annual award for Outstanding Television Reporting, in 1987 and 1994. She has won nine local Emmy Awards, including two for her work on the 2003 and 2004 broadcasts of the LaSalle Bank Chicago Marathon and one for her breaking news reports during the 2008 Northern Illinois University shootings.

See how Dorothy Tucker is related to other HistoryMakers
Donate Now
Click Here To Explore The Archive Today!