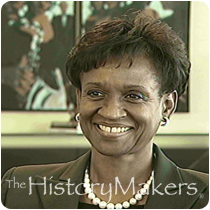 See how Dorothy Terrell is related to other HistoryMakers
Donate Now

After accepting a counseling position with Job Corps, Terrell moved to Poland Springs, Maine. In 1967, Terrell moved to Boston, Massachusetts, where she worked as a counselor for Reverend Leon Sullivan’s Opportunities Industrial Corporation (OIC), and eventually rose to the position of assistant director. In 1973, Terrell joined the Commonwealth of Massachusetts Office for Children, where she became the associate director in 1975. Serving on the advisory board of OIC brought Terrell into contact with representatives of the Digital Equipment Corporation (DEC), who offered her a job as a training manager in 1976. From 1978 to 1980, Terrell was plant human relations manager in Westminster, Massachusetts. She later became group human relations manager of systems manufacturing from 1980 to 1983 and, from 1983 to 1984, served as group manager for engineering and manufacturing. In 1984, Terrell was promoted to plant manager of the DEC plant in Roxbury, Massachusetts. She was the first African American woman to hold this position. Primarily manufacturing keyboards, Terrell reduced the new product cycle from ninety days to seventy-five days and reduced manufacturing costs by more than 30%. Terrell also served as DEC’s group manager of interconnect/packaging from 1987 to 1991. Terrell joined Sun Microsystems, Inc. in 1991 as president of Sun-Express, and as a corporate officer through 1997. At Sun Microsystems, she led the company in asset management performance and grew revenues to over $300 million per year. After 1997, Terrell was served simultaneously as senior vice president of worldwide sales for NMS Communications and president of Platform Services Group. Terrell temporarily left First Light Capital as a partner and became president and CEO of Initiative for a Competitive Inner City (ICIC), a national nonprofit organization that promotes economic prosperity in America’s inner cities through private sector engagement with local residents. Terrell later returned to work for First Light Capital.

Terrell has been the recipient of many awards, including being named one of the Top 50 line managers in America by Executive Female magazine, a Top Ten Business Marketer by Business Marketing magazine, and one of 20 Women of Power and Influence by Black Enterprise magazine. She also received the Distinguished Alumni Award from Florida A&M University. Terrell was a subject in The Wizards and Their Wonders: Portraits in Computing, an exhibit and book by Christopher Morgan, as well as The Enterprising Woman by Mari Florence.

See how Dorothy Terrell is related to other HistoryMakers
Donate Now
Click Here To Explore The Archive Today!