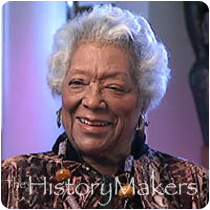 See how Dorothy Runner is related to other HistoryMakers
Donate Now

Civic volunteer Dorothy Runner was born on May 6, 1920, in Nitro, West Virginia; she attended segregated Dunbar Elementary School in Charleston, West Virginia. Runner was an active member of the B-Squares girls service club in a high school, where a significant number of teachers had graduate degrees from Columbia University. Runner graduated from Henry Highland Garnet High School in 1937; that same year, she entered Howard University. While at Howard, Runner joined Alpha Kappa Alpha sorority and was elected Ms. Gridiron. Runner was mentored by Howard's noted theologian, civil rights activist and mystic, the Reverend Howard Thurman. Earning her B.A. degree in social work in 1941, Runner went on to pursue graduate study at the University of Chicago under the guidance of Robert Hess.

While in Chicago, Runner met and married Dr. Charles Runner; she then worked briefly at Provident Hospital before beginning to raise a family. In 1951, Runner moved to Germany where her husband was stationed as an Army physician. While raising her two daughters, Runner's parental activities led her to heightened civic involvement. Active as a member of the AKA's, the Girlfriends, and other women's organizations. Runner developed her friends and associates into a useful network for social change.

Runner served as a board member of the Art Institute of Chicago and Chicago Urban Gateways; through her participation as a member of the New Provident Foundation, she raised $100,000 for Provident Hospital's Building Fund. Runner received the Outstanding Volunteer Award from the National Society of Fundraising Executives in 1985. Runner was a founding member of the South Side Auxiliary of Planned Parenthood and helped establish the 63rd Street Outpatient Clinic; she was also a founding member the Hyde Park\Kenwood Auxiliary of the Illinois Children's Home and Aid Society. As a member of the board of advisers of the Museum of Science and Industry's annual Black Creativity Exhibit, Runner continued to be a valuable contributor to the community.

See how Dorothy Runner is related to other HistoryMakers
Donate Now
Click Here To Explore The Archive Today!