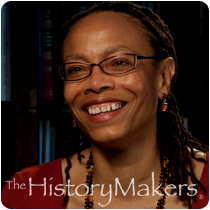 See how Dorothy Roberts is related to other HistoryMakers
Donate Now

Recipient of the 1998 Radcliffe Graduate Society Medal and the 1999 Freedom of Choice Award from the Chicago Abortion Fund, Roberts published her first book, Killing the Black Body: Race, Reproduction, and the Meaning of Liberty, in 1997. The book earned her a 1998 Myers Center Award for the Study of Human Rights in North America. In 2001, she published her second book, Shattered Bonds: The Color Of Child Welfare, which received research awards from the Institute on Domestic Violence in the African American Community and the American Professional Society on the Abuse of Children. Recipient of the 2007 Leadership Award from the Chicago Legal Advocacy for Incarcerated Mothers, in 2009 Roberts earned the Family Defender Award from the Family Defense Center and the YWomen Leadership Award from the YWCA Evanston/North Shore.

Roberts was interviewed by The HistoryMakers on August 27, 2010.

See how Dorothy Roberts is related to other HistoryMakers
Donate Now
Click Here To Explore The Archive Today!