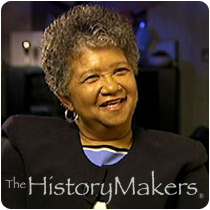 Favorite Color:
Blue
Favorite Food:
Steak
Favorite Time of Year:
Summer
Favorite Vacation Spot:
St. Martin, Bahamas
Favorite Quote:
Do Unto Others As You Would Have Them Do Unto You.

Favorite Color:
Blue
Favorite Food:
Steak
Favorite Time of Year:
Summer
Favorite Vacation Spot:
St. Martin, Bahamas
Favorite Quote:
Do Unto Others As You Would Have Them Do Unto You.

See how Dorothy R. Leavell is related to other HistoryMakers

Dorothy Leavell was born in Pine Bluff, Arkansas on October 23, 1944. Leavell was the valedictorian of her Merrill High School class of 1962 and after relocating to Chicago, Leavell attended Roosevelt University.

Leavell’s first husband, Balm L. Leavell, Jr., founded the Crusader newspaper in Chicago in 1940 and twenty years later, began publishing a similar newspaper in Gary, Indiana. From the time of her husband’s death in 1968, Leavell has served the the Crusader as publisher and editor while rehabilitating its facilities and modernizing the production process.

Leavell was elected president of the National Newspaper Publishers Association (NNPA) in June of 1995 for a two-year term and was re-elected in June 1997 ending her term in 1999. During her tenure, she increased the visibility and international stature of the organization. In June of 2006, Leavell was elected Chairman of the National Newspaper Publishers Association Foundation.

A member of the NNPA for more than forty-two years, Mrs. Leavell has served in various other capacities including assistant secretary, a member of the board of directors, and as treasurer, a post she held as for ten years.

Leavell has often been honored and recognized for her philanthropic and civic contributions. A recipient of many awards, she was honored as NNPA’s Publisher of the Year (1989); the YMCA of Metropolitan Chicago; State of Indiana’s “Attorney General for a Day; (June 9, 2000); Winnie Mandela Endurance with Dignity Award; Nation of Islam Distinguished Service Award; Operation PUSH Family Affair Award; by the National Association of Black Media Women; the Fourth District Community Improvement Association Award in Gary; Dollars & Sense Magazine Award for Excellence in Business; the Mary McLeod Bethune Award; the Humanitarian Award from the Council on African Affairs; the Publishing Award from the National Association of Negro Business and Professional Women’s Club and as the Grand Ye Ye at the 24th Annual 2013 African Festival of the Arts Chicago, Africa International House, Inc., among many others.

Active in her faith and church, Holy Name of Mary Church in Chicago’s Morgan Park community, Leavell is the wife of John Smith, her second husband, and the mother of two children and three grandchildren. She also raised a niece and nephew.

Dorothy Leavell was interviewed by The HistoryMakers on April 1, 2003.

See how Dorothy R. Leavell is related to other HistoryMakers
Click Here To Explore The Archive Today!