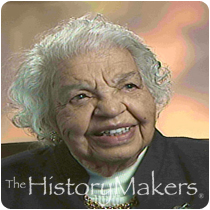 See how Dorothy Harrison is related to other HistoryMakers

Educator and former president of Delta Sigma Theta Sorority, Inc., Dorothy Penman Harrison was born Dorothy Marie Penman on December 8, 1907 in Portsmouth, Ohio. Harrison’s parents were former teacher, Annabelle Layne, and chef, Victor Logan Penman. Harrison grew up in Portsmouth where she learned to read and took piano lessons. Attending all black Eleventh Street Elementary School, Harrison graduated from Portsmouth High School in 1924. At Fisk University, she studied history with A.A. Taylor. When both of her parents passed away in 1926, Harrison returned to Ohio and taught school. She earned her B.A. degree in education from Ohio State University in 1932. That same year, Harrison joined the Epsilon chapter of Delta Sigma Theta Sorority, Inc. and married educator, Dr. Gerald Lamar Harrison. Her husband earned his Ph.D. in education from Ohio State University in 1936 while he was serving as head of the Education Department at Prairie View A&M College in Texas.

In 1940, Harrison moved to Oklahoma when her husband was named president of the Colored Agricultural and Normal University. The college was renamed Langston University in 1941. As first lady to the president, Harrison hosted distinguished guests like W.E.B. DuBois and Liberia’s Clarence L. Simpson. In 1944, she traveled to Liberia for the inauguration of William V.S. Tubman as Liberia’s president, also attending were Mary McLeod Bethune and Eta Moten Barnett. Tragedy struck as Harrison’s eldest son, Gerald Lamar, passed away at the age of thirteen, in 1948, followed by the younger son, Richard, in 1950. Returning to school, Harrison acquired her M.S. degree in education from Oklahoma State University. She also amassed a record of civic activities, serving as treasurer of Delta Sigma Theta Sorority, Inc. under president Dorothy Height in 1952 and national officer for The Links, Inc. in 1957. Harrison was elected president of the sorority in 1956 and served through 1958.

In 1960, Harrison relocated to Chicago, Illinois with her husband after spending twenty years at Langston University. She continued her public service as a board member of the Chicago Metropolitan YWCA and as a national board member of the Central Review Team and the Urban League Women’s Board. Harrison is a lifetime member of the NAACP and the National Council of Negro Women. In 1965, Harrison was selected as co-chair of the federal Head Start program. She also served on the board of directors of the City Associates of the Chicago Art Institute. Harrison has traveled numerous times to Europe, Africa, Asia, South America and the Caribbean.

Awarded an honorary doctorate from Langston University in 2003. Harrison passed away on December 22, 2010.

Harrison was interviewed by The HistoryMakers on January 18, 2007.

See how Dorothy Harrison is related to other HistoryMakers
Click Here To Explore The Archive Today!