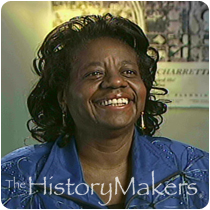 See how Dorothy Fields is related to other HistoryMakers
Donate Now

Archivist Dorothy Fields was born on December 31, 1942 in Miami, Florida. She was raised as an only child in the African American neighborhood of Overtown, formerly known as Colored Town. The family then purchased property in the Brown Subdivision of Miami. Fields attended Phyllis Wheatley Elementary School and Booker T. Washington High School. In high school, Fields was a member of the concert and marching band, and excelled in journalism.

In 1960, Fields graduated from Booker T. Washington High School. The following year, she enrolled at Spelman College in Atlanta, Georgia, as an art major. As a freshman, Fields participated in the 1960 march with Dr. King to desegregate Rich’s department store in downtown Atlanta. Upon completion in a student exchange program at Smith College in Northampton, Massachusetts, Fields earned her B.F.A degree in art from Spelman College in 1964. After graduation, Fields worked as a school librarian, reading teacher and educational specialist for Miami-Dade County Public Schools for 40 years.

In 1974, Fields then received her M.A. degree in curriculum and instruction through a local outreach program out of the University of Northern Colorado. In that same year, in preparation for the nation’s bicentennial, Fields began a search for information from which curriculum materials could be developed on the black experience in South Florida. Fields was unable to find any information about South Florida’s black history in any school or public library. From this experience Fields established The Black Archives, History and Research Foundation, a photographic repository containing the legacies of Miami’s black community f South Florida in 1977. In the same year, Fields received a certificate from Emory University in Atlanta, Georgia, in Archives Administration and Historic Preservation. Later, at The Union Institute and University in Cincinnati, Ohio, she earned a Ph.D. in 20th century African-American history, historic preservation, and public history.

Fields’ vision was to establish a manuscript and photographic repository for the African American community of Miami. She initially began collecting oral histories from older African American residents living in the communities of Overtown and the Brown Subdivision. From her efforts, the city of Miami later designated the community of Overtown as a National Trust “Main Street” community. Overtown is officially named the Historic Overtown Folklife Village. Fields is also responsible for the successful restoration of the landmark Lyric Theater located in Overtown. Renowned artists such as Nat King Cole, Marion Anderson, Etta Moten Barnett once performed at this theater.

Fields has received numerous honors and awards for her efforts in preserving African American history and culture. She serves a member of the advisory board for the Haitian Heritage Museum, and a board member for the Vizcaya Museum and Gardens in Miami. She was also a Woodrow Wilson Teacher’s Fellow at Princeton University. A life member of the association for the Study of African American Life and History she also holds membership in the Society of American Archivists and the Academy of Certified Archivists. She is a member of Zeta Phi Beta Sorority, Inc. and The Links, Incorporated.

See how Dorothy Fields is related to other HistoryMakers
Donate Now
Click Here To Explore The Archive Today!