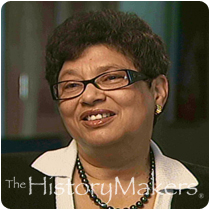 See how Dorothy Cowser Yancy is related to other HistoryMakers

Johnson C. Smith University President Dorothy Cowser Yancy was born on April 18, 1944 in Cherokee County, Alabama to Linnie Bell Covington Cowser and Howard Cowser, a farmer. She was raised on the family farm once owned by her great-great grandfather. Upon graduation from Hatcher High School in 1960, Yancy entered Johnson C. Smith University in Charlotte, North Carolina where she was a student activist in the Civil Rights Movement, holding memberships in the SGA, SCLC, and SNCC. She graduated from Johnson C. Smith University in 1964 with her B.A. degree in history. In 1964, Yancy entered the University of Massachusetts where she earned her M.A. degree in history. Simultaneously, she received a certificate in management development from Harvard University. In 1968, Yancy married Robert James Yancy, and in 1974, she entered the doctoral program in political science at Atlanta University where she became an accomplished scholar.

After receiving her Ph.D. degree from Atlanta University, Yancy sought post-graduate work at a variety of institutions including the University of Singapore, Hampton University, Northeastern Illinois University, Northwestern University, Georgia Tech University and the University of Illinois, Chicago. Yancy became a tenure-track professor at the Georgia Institute of Technology in 1972 and served as professor of history, technology, and society and management. She became the first African American professor to be promoted and tenured as a full professor. She also served as Associate Director of the School of Social Sciences, and she remained at Georgia Tech until 1994, when she became the first female president of Johnson C. Smith University.

As president, Yancy doubled the University endowment to approximately $57 million and increased applications 300%. She also upgraded the technical capabilities of the school by ensuring that each undergraduate student receives an IBM Thinkpad upon entry through a lease program. During her presidency, Yancy became the first female board president of the Central Intercollegiate Athletic Association.

Yancy was interviewed by The HistoryMakers on June 20, 2007.

See how Dorothy Cowser Yancy is related to other HistoryMakers
Click Here To Explore The Archive Today!