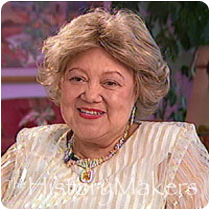 See how Doris Zollar is related to other HistoryMakers
Donate Now

Doris L. Zollar, educator, social service administrator, and entrepreneur, is best known for her volunteerism and civic activity. She was born as Doris L. Love on December 7, 1930, in Little Rock, Arkansas, where her grandfather, Taylor Henson, defeated the attempts of whites to take his valuable farmland. Young Doris enjoyed a relatively comfortable and happy childhood, but was always encouraged by her family to take her education seriously and to give something back to the community.

Doris graduated as Valedictorian of Little Rock's Dunbar High School in 1947. She earned her B.A. with honors from Talladega College in Talladega, Alabama, in 1951. She was a graduate student at University of California at Los Angeles and at the University of Chicago.

She married Dr. Lowell Zollar in 1954 and started a family in Chicago, where she was employed as a public school teacher. She became executive assistant to the director of the Woodlawn Organization in 1974 and director of development for The Woodlawn Organization in 1976. Since 1976, Doris Zollar has been self-employed in contracting and vending ventures. In 1977, she established Triad Consulting.

It is Doris Zollar's volunteer activities that have made history. She is on the Women's Board of Operation PUSH, The Women's Board of the United Negro College Fund, the first black president of the United Nations Children's Fund Chicago, the Chicago Heart Association, the World Service Council of the YWCA, Deborah's Place (home for battered women), Chicago Academy of Performing Arts and was appointed to the board of the Chicago Port Authority by the late Mayor Harold Washington.

Well known in social, charitable and political circles, Zollar has been a guest at the White House and honored numerous times. She lives in Chicago with her husband and two successful grown children.

See how Doris Zollar is related to other HistoryMakers
Donate Now
Click Here To Explore The Archive Today!