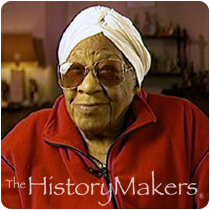 See how Doris Jones is related to other HistoryMakers

Artistic director and dance instructor Doris Winnefred Jones was born in Malden, Massachusetts on June 3, 1913, to Maddie Lightfoot Jones and Walter James Jones. She grew up with aspirations of being a ballet dancer, but found it difficult to find dance schools that would accept her as a student because of the paucity of African Americans involved in classical dance. At a young age, Jones was already a formidable tap dancer and was offered an opportunity to tour with Bill "Bojangles" Robinson, but her parents would not allow her to go. As a teenager, she traded tap dancing lessons for ballet lessons at a classical dance school in Boston, Massachusetts.

In 1941, Jones and another young dance teacher, Claire Haywood, founded the Jones-Haywood School for Ballet in order to provide young African American students with the opportunity to learn classical dance. Jones and Haywood later formed the Capitol Ballet Company as an integrated performing troupe. Jones served as the company's artistic director until 1982. Today, the Capitol Ballet Company holds the distinction of being the oldest predominately African American ballet company in the United States. In 1980, Jones also formed the Jones-Haywood Youth Dancers in order to provide more opportunities for younger dancers.

During her long career, Jones both trained and studied under some of the biggest names in classical dance including Chita Rivera, Hinton Battle, Sylvester Campbell and Sandra Fortune-Green. She also served as director of the Washington, D.C. Public Schools Dance Program. Over the years, she has choreographed for the Washington Opera Society and the Washington Civic Opera. She has been the recipient of the Dr. Martin Luther King, Jr. Medal for Outstanding Service in Human Rights and the Metropolitan Theatrical Society's Mainline to Stardom Award.

Doris Jones was interviewed by The HistoryMakers on July 25, 2003.

See how Doris Jones is related to other HistoryMakers
Click Here To Explore The Archive Today!