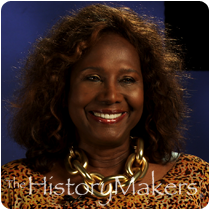 See how Dori Wilson is related to other HistoryMakers
Donate Now

Publicist and model Dori Wilson was born in Winona, Mississippi. At the age of seven, Wilson moved to Chicago, Illinois. She attended Farren School, Shakespeare Elementary School, and Hyde Park High School. She continued her education at Roosevelt University, where she graduated with her B.A. degree.

Upon her graduation from Hyde Park High School, Wilson began working for Goldblatt’s in the Accounts Payable Adjusting Department in 1961. Wilson then moved to Compton Advertising, Inc., where she worked as a secretary and assistant producer. She also started her part-time modeling career and became the first African American runway model in Chicago, Illinois in 1964. Wilson began her modeling career by working for Marshall Field & CO. and Carson Pirie Scott. In 1968, Wilson joined Foote, Cone & Belding and on their advertising project with Sears, Roebuck & Co. During the project, she also worked as a model and instructor at Sears, Roebuck, and Co. Charm School. She was promoted in 1970 to director of fashion and casting at Foote, Cone & Belding, where she cast models and helped producers during shoots. During this time, she continued to model and starred in numerous fashion shows, advertisements, and events, including Gucci’s Fall 1970 campaign and the Dress Horsemen and Trophy Board Annual Benefit Fashion Spectacular in 1975. In 1980, Wilson began her successful entrepreneurial career with the opening of Dori Wilson Public Relations, a firm whose clients have included the City of Chicago, Tiffany & Co., and the NAACP Legal Defense Fund. The following year, Wilson helped form The Chicago Academy for the Arts.

Wilson has been a member of the Girl Scouts of Chicago’s Association Board for over thirty years. She has also been listed in Who’s Who Among Black Americans and in Donna Ballard’s book, Doing It For Ourselves: Success Stories of African American Women in Business, which was published in 1997. In 2008, she was honored in an evening of recognition at the Stanley Paul/Raelene Mittelman Scholarship Benefit.

See how Dori Wilson is related to other HistoryMakers
Donate Now
Click Here To Explore The Archive Today!