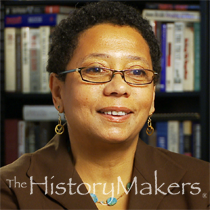 Favorite Color:
Blue, Red
Favorite Food:
Sashimi
Favorite Time of Year:
Fall
Favorite Vacation Spot:
Caribbean, Home
Favorite Quote:
Nothing To It But To Do It.

Favorite Color:
Blue, Red
Favorite Food:
Sashimi
Favorite Time of Year:
Fall
Favorite Vacation Spot:
Caribbean, Home
Favorite Quote:
Nothing To It But To Do It.

See how Dori Maynard is related to other HistoryMakers
Donate Now

Journalism Professor Dori Maynard was born on May 4, 1958 in New York, New York. She was raised by her father, Robert C. Maynard and step-mother, Nancy Hicks Maynard. In 1977, Maynard’s parents founded the Institute for Journalism Education, a nonprofit organization dedicated to training journalists of color and improving diversity in the media. They became the first African American owners of a major metropolitan newspaper when they bought The Oakland Tribune in 1984. Maynard attended Middlebury College and graduated with her B.A. degree in American history. After graduation she worked for The Bakersfield Californian, The Patriot Ledger, and the Detroit Free Press. In 1992, Maynard was awarded a Nieman Fellowship from Harvard University. Maynard and her father were the first father-daughter duo to have received this award. Maynard specialized in researching public policy and poverty. When her father passed away in 1993, Maynard began work on Letters to My Children, a compilation of nationally syndicated columns written by her father with introductions written by Maynard. The book was published in 1995.

In 1994, Maynard began working at the Robert C. Maynard Institute for Journalism Education, renamed after Robert Maynard’s death. Maynard worked on the Fault Lines project, a concept her father had originated, which later became the Institute's organizing principle for diversity initiatives. Maynard also began work on the History Project, a groundbreaking archive documenting and preserving the stories of African American journalists who integrated mainstream media in the 1960s and 1970s.

In 2001, Maynard was appointed president of the Robert C. Maynard Institute and she received the “Fellow of Society” award from the Society of Professional Journalists that same year. In 2004, Maynard was named one of the “10 Most Influential African Americans in the Bay Area” by CityFlight Media Network. Maynard has written many articles dealing with issues of race and diversity in the media. She has also written on her attempts to live on the "fault lines" in her daily life.

Dori Maynard was interviewed by The HistoryMakers on March 9, 2011.

See how Dori Maynard is related to other HistoryMakers
Donate Now
Click Here To Explore The Archive Today!