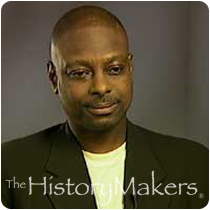 See how Donzell Starks is related to other HistoryMakers

Chicago businessman and movie theater owner Donzell Starks was born on Chicago's South Side in 1960. His parents divorced when he was an infant. Raised by his grandmother, Starks exhibited a talent for basketball. His skills led to a scholarship at Western Illinois University, where Starks received a dual degree in finance and business administration. He later earned an M.B.A. from the Illinois Institute of Technology. After working in corporate America in banking and finance, Starks and his wife decided to take the entrepreneurial plunge. They formed Inner-City Entertainment in an effort to develop the large, untapped market of African American moviegoers. In 1991, Starks and his wife, Alicia, decided to focus on inner-city Chicago and they began to explore partnerships to build new theater complexes in minority neighborhoods - areas that major movie chains had historically neglected.

In 1997, Starks beat out Magic Johnson to win financial support from the city of Chicago to build three multiplexes on Chicago's South and West sides. The new theaters were hailed for their aesthetic beauty and their ability to bring jobs to otherwise neglected and rundown areas. By 1999, Starks expanded his theater empire, building a new cinema in Charlotte, North Carolina, and setting his sights on other inner-city neighborhoods around the country. The same year, the company partnered to create the Meridian Entertainment Group, which began by opening a chain of Meridian Theaters and then aquired eight existing Chicago movie theaters. In just two years, Starks had gone from just three multiplexes to controlling 20 percent of Chicago's movie screens. A downturn in the market and other problems forced Starks to cut back to their original investments, which he operates with his wife today. They see their movie theaters as community centers.

Donzell Starks married his high school sweetheart, Alisa, in 1988. They were both life and business partners and lived with their son, Ahmad, in Chicago.

See how Donzell Starks is related to other HistoryMakers
Click Here To Explore The Archive Today!