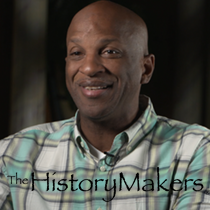 Favorite Color:
Black, but according to my mood
Favorite Food:
Jamaican
Favorite Time of Year:
All Seasons
Favorite Vacation Spot:
Home
Favorite Quote:
No Is As Good An Answer As Yes.

Favorite Color:
Black, but according to my mood
Favorite Food:
Jamaican
Favorite Time of Year:
All Seasons
Favorite Vacation Spot:
Home
Favorite Quote:
No Is As Good An Answer As Yes.

See how Donnie McClurkin is related to other HistoryMakers
Donate Now

McClurkin formed the McClurkin Singers with his older sisters and a neighbor; and in 1983, the group performed with the Tri-Boro Mass Choir, led by Albert Jamison, who introduced McClurkin to gospel singer James Cleveland, who became a mentor to McClurkin. McClurkin made annual visits to Los Angeles, California to sing with Cleveland at Cornerstone Institutional Baptist Church. From 1987 to 1989, McClurkin sang in the chorus for the Broadway production of Don't Get God Started, which debuted at the Longacre Theatre in New York City. In 1989, McClurkin moved to Detroit, Michigan, where he and Pastor Marvin L. Winans co-founded Perfecting Church. With the choir, McClurkin recorded the songs “Speak to My Heart” and “We Worship You.” After signing with Warner Bros. Entertainment, Inc., McClurkin released his first self-titled solo album in 1996, which gospel singer and mentor Andrae Crouch helped to produce. In the late 1990s, McClurkin wrote songs for the animated film The Prince of Egypt, and signed a publishing contract with The Walt Disney Company. He also appeared on The Oprah Winfrey Show, and performed at the Grammy and Stellar Awards. His second album, Live in London and More, was number one on the U.S. Gospel Chart for more than forty weeks after its release in 2000.

McClurkin was ordained as a pastor by Marvin L. Winans in 2001. That same year, he established Perfecting Faith Church in Freeport, New York, which started as a small bible study group. His weekly radio program, The Donnie McClurkin Show, debuted in 2006, and went on to broadcast in over seventy-five markets. From 2010 to 2015, McClurkin appeared as a judge on five seasons of BET’s Sunday Best. His discography includes Again (2003), Psalms, Hymns and Spiritual Songs (2004), We Are All One (Live in Detroit) (2008), Duets (2014), and The Journey (Live) (2016).

McClurkin released his autobiography Eternal Victim, Eternal Victor in 2001; and was the subject of the subsequent biographical documentary From Darkness to Light: The Donnie McClurkin Story in 2004. McClurkin had a cameo role in the film The Fighting Temptations, and starred alongside actors Boris Kodjoe and Idris Elba in the movie The Gospel in 2005. His weekly television program Perfecting Your Faith began airing on The Word Network in 2009. McClurkin collaborated often with gospel singers Kirk Franklin and Yolanda Adams, including on the Hopeville tour, and received numerous awards for his music, including multiple Grammy, Stellar, Dove, and NAACP Image Awards.

Donnie McClurkin was interviewed by The HistoryMakers on October 6, 2016.

See how Donnie McClurkin is related to other HistoryMakers
Donate Now
Click Here To Explore The Archive Today!