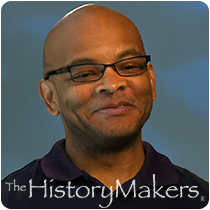 See how Donnell Walton is related to other HistoryMakers

Physicist Donnell Thaddeus Walton was born on November 8, 1966 in Mt. Clemens, Michigan. He was one of three children born to Antoinette Williams. Walton attended North Carolina State University and graduated with his B.S. degree in physics and electrical engineering in 1989. Donnell went on to enroll in the University of Michigan where he studied under Dr. Walter Lowe and graduated with his Ph.D. degree in applied physics in 1996. He was awarded a postdoctoral fellowship with AT & T Bell Laboratories in Murray Hill, New Jersey under its Creative Research Fellowship Program (CRFP).

In 1996, Walton was hired as an assistant professor at Howard University where he taught in the physics department until 1999. Walton was then recruited by Corning, Inc. and assigned to the research and development department where he performed and led research in fiber amplifiers and lasers. After serving as project manager of science and technology from 2004 to 2008, he joined Corning, Inc.’s Gorilla Glass team where he was named senior applications engineer. While there, Walton developed products for the burgeoning information and technology sector and worked to extend the applicability of Gorilla Glass. In 2010, Walton was named manager of the Worldwide Applications Program at Corning, Inc. In addition, he has authored fifteen patents and over sixty technical papers in scholarly, peer review journals including Optics Express and Optics Letters.

Walton’s professional affiliations include memberships in the Society of Information Display, the Optical Society of America, and the American Physical Society. In 2013, Walton received the “Outstanding Technical Contribution to Industry Award” from U.S. Black Engineer and Information Technology.

Donnell Thaddeus Walton was interviewed by The HistoryMakers on July 10, 2013.

See how Donnell Walton is related to other HistoryMakers
Click Here To Explore The Archive Today!