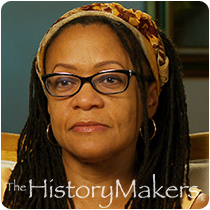 Journalist and author Donna Britt was born in Gary, Indiana, to Thomas and Geraldine Britt.  The sole daughter among four children, Britt grew up in a tight-knit, achievement-focused household.  She graduated from Gary West Side High School in 1972, and attended Hampton University, where she graduated in 1976 with her B.A. degree in Mass Media Arts. The following year, Britt began working on her M.A. degree in journalism from the University of Michigan. In 1977, her older brother Darrell was shot and killed by a pair of Gary policemen.  After internships with the Charlotte Observer and the Ann Arbor News, Britt graduated with her M.A. degree from the University of Michigan in 1979.


After graduation, Britt was hired as a staff writer for the Detroit Free Press, working for six years as a general assignment reporter, feature writer and fashion columnist. While in Detroit, Britt married a local public relations executive, a union that lasted three years and produced two sons. In 1985, she was hired as an editor at USA Today, eventually becoming the newspaper’s Los Angeles bureau chief and co-movie critic, positions she held until 1989. That year, Britt attained her “dream job” as a writer for the Style section of the Washington Post . After three years in Style, Britt was promoted to Metro columnist. Her opinion pieces covered a range of subjects, including gender and race relations, pop culture, books, film, and personal recollections. Syndicated by The Washington Post Writer’s Group, Britt’s column eventually appeared in sixty-two newspapers. From 2009 to 2010, Britt served as a columnist for the Politics Daily online news website.


In 2011, Britt published the critically-acclaimed book Brothers (& Me): A Memoir of Loving and Giving, which was excerpted by Essence magazine and listed as one of “10 Titles to Pick Up Now” by O Magazine.  Winner of numerous local and national awards, Britt was nominated by the Washington Post for the Pulitzer Prize in journalism in 1990. That same year, she won Best Commentary from the National Association of Black Journalists. Britt’s columns won numerous local and national awards, including the Distinguished Writing Award for commentary and column writing by the American Society of Newspaper Editors, and honors from the American Association of Sunday and Feature Editors. Britt is married to Washington Post Managing Editor Kevin Merida. They have three sons: Justin Britt-Gibson, Darrell Britt-Gibson and Skye Merida.


Donna Britt was interviewed by The HistoryMakers on August 6, 2013.