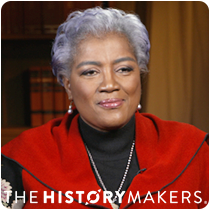 "Procrastination is the greatest thief of time. (MLK)"

Brazile became interested in politics as a volunteer for the 1976 and 1980 presidential campaigns of Jimmy Carter-Walter Mondale. After graduating from Louisiana State University, Brazile worked as a lobbyist for the National Student Education Fund in Washington, D.C. Coretta Scott King hired Brazile to help with designating Martin Luther King Jr. Day as a federal holiday. In 1984, Brazile served as the mobilization director for Reverend Jesse Jackson’s Democratic presidential campaign. In 1987, Brazile was hired as Dick Gephardt’s national field director, and then as the deputy field director for Michael Dukakis. Brazile then accepted a position with the Community for Creative Non-Violence organization, where she served as chief of staff and press secretary to congressional delegate Eleanor Holmes Norton in 1990. In 1992 and 1996, Brazile served as an advisor for Bill Clinton’s presidential campaigns. In 1998, she ran the Voter/Campaign Assessment Program for the Democratic Congressional Campaign Committee. In 1999, Brazile was hired as the campaign manager for Democratic presidential candidate, Al Gore. Brazile was appointed chair of the Democratic National Committee’s Voting Rights Institute in 2000.

Brazile released her memoir, Cooking with Grease-Stirring Pots in American Politics in 2004. In 2011, and again in 2016, Brazile served as interim chair of the Democratic National Committee. Brazile released her second book, Hacks: The Inside Story of the Break-Ins and Breakdowns that Put Donald Trump in the Whitehouse in 2017. Brazile was a frequent contributor for Ms. Magazine and Roll Call. Brazile also served as a correspondent for CNN and ABC News, founded her own consulting firm named Brazile & Associates, and was a guest lecturer at Harvard University and Georgetown University.

Brazile was a member of the Screen Actors Guild, and the Louisiana Recovery Authority from 2005 to 2009. In 2017, she received the Torch Award from the National Newspaper Publishers Association and the W.E.B. Du Bois Metal from Harvard University’s Hutchins Center for African & African American Research. Brazile was a recipient of the 2018 Women of Power Legacy Award from Black Enterprise.

Donna Brazile was interviewed by TheHistoryMakers on March 20, 2018.