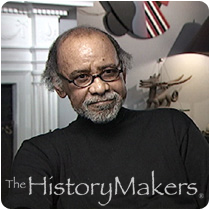 See how Donald Stull is related to other HistoryMakers

Architect Donald L. Stull, was born on May 16, 1937, in Springfield, Ohio. His family moved to Columbus, Ohio in 1949, where he graduated from East High School in 1955. He attended Ohio State University, earning a B.S. degree in architecture in 1961. Two years later, he received a master’s degree in architecture from Harvard University’s Graduate School of Design. For the next four years he developed his skills and knowledge with the Architects Collaborative in Cambridge, Massachusetts, and Samuel Glaser Associates in Boston, as a designer and project manager.

Stull, a Fellow of the American Institute of Architects (FAIA), is the founding partner, owner, and president of the architectural firm, Stull and Lee Associates, Inc. Founded in 1966 as Stull Associates, in Boston, Massachusetts, his architectural and urban design and planning firm has been recognized throughout New England and nationally and internationally. Stull’s broad experience and contributions include the design of educational, health care and correctional facilities, highway infrastructure, transit stations and multi-family housing. Stull has also been a leader by bringing attention to the unique contributions of African American architects and urban designers across America with New DesigNation. The first New DesigNation Conference was held in Philadelphia in November 1996. Over 500 designers of color examined issues faced by African Americans in the design profession

In the mid-1960s, Stull established himself as a solo architect and planner for both public and private agencies to meet the needs of a “new Boston,” as a case of urban renewal. In 1990, M. David Lee, a graduate of Harvard’s Graduate School of Design, joined Stull, and the firm became Stull and Lee Associates, Inc. With co-partner Lee and a staff of forty design professionals – Stull and Lee grew from residential design to major building projects in Boston including the Roxbury Community College, the Harriet Tubman House, and the Ruggles Street Station of the Massachusetts Bay Transportation Authority (MBTA).

Stull is the father of three: Cydney, vice-president and treasurer of a Florida trucking business; Robert, a noted comic book illustrator; and Gia, an art school student.

Donald Stull was interviewed by The HistoryMakers on December 3, 2004.

See how Donald Stull is related to other HistoryMakers
Click Here To Explore The Archive Today!