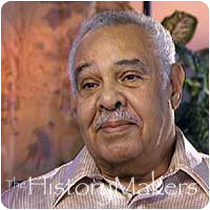 See how Donald Miller is related to other HistoryMakers
Donate Now

Former business executive Donald L. Miller was born in New York on January 10, 1932, to Mamie Johnson and John H. Miller. From 1948 to 1968, Miller served in the U.S. Army, rising to the rank of major and earning the Legion of Merit award in his final year. Near retirement from the Army, Miller lived in Maryland and returned to school, receiving his B.A. from the University of Maryland in 1967.

Due to a recommendation from his mother who worked at Inmont Corporation, Miller was hired to work as a special assistant to the president in the human resources area. Miller then left Inmont to work in that same capacity at Seatrain Shipbuilding, helping recruit African American employees. Miller was then recruited to a senior ranking position as deputy assistant secretary of defense under President Richard Nixon, a position he held from December 1971 to January 1973. In 1973, Miller was honored by the Department of Defense for his work with the Distinguished Civilian Award.

From 1973 to 1978, Miller worked in academia as vice president of personnel and management at Columbia University. He then went on to hold executive positions with a number of companies, including International Paper, Con Edison and Dow Jones & Company, where he served as vice president of employee relations from 1986 until 1995. Following his retirement from Dow Jones, Miller entered the entrepreneurial and publishing world when he started Our World News as a high-level African American news publication.

Over the years, Miller has been active with a number of professional organizations, including serving on the board of directors of the Bank of New York and Schering Plough. For twenty years, he was a trustee at Pace University, and since 1981, served as director of the Jackie Robinson Foundation. Miller had been married to his wife, Gail Aileen Wallace, since 1981. They have one child, Lynn Ann, and lived in Las Vegas. Miller and his wife also founded Associated Black Charities in New York.

See how Donald Miller is related to other HistoryMakers
Donate Now
Click Here To Explore The Archive Today!