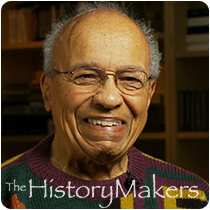 See how Donald McKayle is related to other HistoryMakers
Donate Now

Choreographer and educator Donald McKayle was born on July 6, 1930 in New York City, New York to Eva Wilhelmina Cohen McKayle and Philip Augustus McKayle. Inspired by a Pearl Primus performance, he began dancing his senior year in high school, and won a scholarship to the New Dance Group in 1947.

In 1948, McKayle choreographed his first piece of work with the New Dance Group, and premiered his solo piece, Saturday's Child. From 1951 to 1969, McKayle founded and directed his own dance company, Donald McKayle and Company, which premiered his first major work entitled Games in 1951. McKayle then went on to choreograph masterworks Rainbow 'Round My Shoulder, District Storyville and Songs of the Disinherited. Golden Boy (1964) was his first Broadway production, followed by I'm Solomon (1969) and Dr. Jazz (1975). McKayle directed and choreographed Raisin (1974), which was awarded a Tony for best musical. He was responsible for the entire concept, staging and choreography of the award-winning Sophisticated Ladies (1981). McKayle has also choreographed for films, including Bedknobs and Broomsticks (1970), The Great White Hope (1972), and The Minstrel Man (1976). McKayle has also choreographed stage acts for singers such as Harry Belafonte and Rita Moreno. In 2001, he choreographed the monumental ten-hour production of Tantalus.

The repositories for McKayle’s work include the Alvin Ailey American Dance Theatre, the Cleveland San Jose Ballet, and the Los Angeles Contemporary Dance Theatre. He served as head of the Inner City Repertory Dance Company from 1970 to 1974, and then as choreographer for the Limon Dance Company since 1995. In all, McKayle choreographed over ninety performances for dance companies in the U.S., Canada, Israel, Europe and South America. He has taught at Bennington College, the Juilliard School, the American Dance Festival, and in Europe. McKayle served as dean of the School of Dance at the California Institute of the Arts, and as professor of dance and the artistic director for the University of California, Irvine Dance.

McKayle has received numerous honors and awards, including an Outer Critics Circle Award, a NAACP Image Award, the Capezio Award, the Samuel H. Scripps/American Dance Festival Award,  the American Dance Guild Award, a Living Legend Award from the National Black Arts Festival, two Choreographer’s Fellowships from the National Endowment for the Arts, the Dance/USA Honors, the Martha Hill Lifetime Achievement Award, the Annual Award from the Dance Masters of America, the Lifetime Achievement Award from the Dance Under the Stars Choreography Festival, the Black College Dance Exchange Honors, the Dance Magazine Award, and the American Dance Legacy Institute’s Distinguished and Innovative Leadership Award, among others. In 2005, McKayle was honored at the John F. Kennedy Center in Washington, D.C. and presented with a medal as a Master of African American Choreography. He has been named by the Dance Heritage Coalition as "one of America’s Irreplaceable Dance Treasures: the first 100."

McKayle is the author of the 2002 autobiography, Transcending Boundaries: My Dancing Life.

Donald McKayle was interviewed by The HistoryMakers on December 17, 2013.

See how Donald McKayle is related to other HistoryMakers
Donate Now
Click Here To Explore The Archive Today!