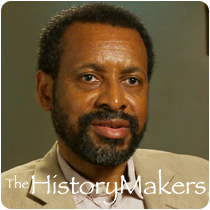 See how Donald Lyons, Sr. is related to other HistoryMakers

Physicist and physics professor Donald R. Lyons was born in 1954 in Stamps, Arkansas. His father, Patrick Donald Lyons, Jr., was a bricklayer; his mother, a housewife. After attending J.L. Jones Elementary School and J.A. Phillips Jr., High School, Lyons graduated from, Webster High School in 1972. While in high school, Lyons enrolled in the Upward Bound program. With his parents unable to pay for college, the Upward Bound program provided Lyons with the opportunity to earn college credit prior to graduation, gain experience working in a university laboratory, and earn a full academic scholarship to attend Grambling State University. Lyons graduated from Grambling State University in 1976 with his B.S. degrees in physics and mathematics. He then enrolled in Stanford University where he studied under Nobel Laureates Arthur L. Schawlow and Theodor Hansch and received his M.S. degree in physics in 1978 and his Ph.D. degree in physics in 1982.

From 1975 to 1976, Lyons served as a research fellow at Bell Telephone Laboratories in the Solar Physics Group, and as a researcher at Argonne National Laboratory in the Solid State Physics Department. He then joined Corning, Inc. in 1982 and was appointed as a senior scientist in the Applied Physics Department. Lyons moved to California in 1985 and was hired as a physicist at Lawrence Livermore National Laboratory in the Applied Technology Section until 1990. Lyons continued his career in industry as scientist for Grumman Aerospace Corporation where he directed the Sensor Sciences and Materials Structures Groups at the Grumman Corporate Research Center. In 1993, Lyons joined the faculty of Hampton University and was named the University Endowed Professor of Physics. At Hampton University, Lyons also served as the director of the Research Center for Optical Physics.

Lyons has successfully applied for and received several U.S. Patents and fifteen research grants and contracts related to the use of distributed Bragg reflection sensors for commercial applications. In addition, he has created projects for the Department of Defense, the National Aeronautic and Space Administration, and the National Institutes of Health. Lyons was recognized by the Upward Bound program for directing successful programs that center on mentoring undergraduate and graduate students in STEM (science, technology, engineering, and mathematics) fields. The American Physical Society and the Virginia Business Observer have both featured Lyons and recognized his contributions to science and technology.

Donald R. Lyons was interviewed by The HistoryMakers on May 20, 2013.

See how Donald Lyons, Sr. is related to other HistoryMakers
Click Here To Explore The Archive Today!