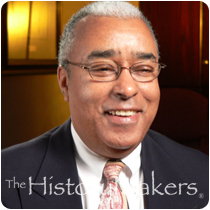 See how Donald L. Harwell is related to other HistoryMakers

Vice President of Sales for PowerStream, Inc., Donald Lyle Harwell was born on January 19, 1946, in Los Angeles, California, to Andrew L. Harwell and Veronica Rodrigeuz. As a youth, Harwell attended 42nd Street Elementary School in Los Angeles. He went on to graduate from Susan Miller Dorsey High School where he was a member of the football and track teams. Harwell attended East L.A. Junior College before receiving a football scholarship to attend California State University in Los Angeles.

After completing a course in scuba diving, Harwell became a certified scuba diving instructor and earned a position with Pacific Diver Supply in Long Beach, California. He served in that capacity, instructing high school students in Orange County and Los Angeles County until 1971. Then, in 1974, Harwell founded California Concepts providing wooden aquarium stands to department stores in southern California. In 1978, Harwell was hired as a salesman for Rotron Fans and designed the cooler for the SR 71 Blackbird reconnaissance aircraft. Harwell later moved to Colorado to work for Howard Fans in 1980. While in Colorado, he was recruited as an independent sales representative and later worked for Component Well until 1995.

Harwell moved to Utah and served as chaplains’ assistant at the Utah State Prison in 1986. In 1992, he served on the corrections advisory council. In 1996, Harwell was influential in the reemergence of the Genesis Group, a missionary group that works to provide spiritual strength to its members. He went on to become the organization’s president in 2003. Harwell also served as the director for the Adult Probation and Parole Citizens Review Board helping to promote integrity and accountability in ex-cons.

Harwell is Vice President of Sales for PowerStream, Inc. and serves on the Stake High Council of the Midvale Utah Union.

Harwell lives with his wife, Jerri, and their six children in Salt Lake City, Utah.

See how Donald L. Harwell is related to other HistoryMakers
Click Here To Explore The Archive Today!