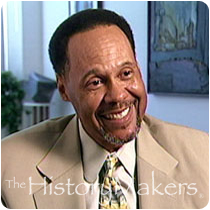 See how Donald J. Jackson is related to other HistoryMakers
Donate Now

Donald J. Jackson was born on September 18, 1943 in Chicago, Illinois to Lillian Peachy and John Wesley Jackson. As founder and CEO of Central City Productions, Jackson has dedicated his life to filling the gap left by mainstream media. For more than 30 years, he has produced and marketed quality television shows that emphasize African American culture.

Jackson graduated from Marshall High School in 1961, where he played basketball on a championship team and earned a basketball scholarship to Northwestern University. He was captain of the basketball team and graduated in 1965 with a B.S. in radio, TV and film. Jackson began working in advertising for RR Donnelley as an account executive. Then, in 1967, Chicago radio station WVON hired him as the sales manager.

Jackson is Chairman of the Board of the DuSable Museum of African American History and has served as a board member of the Chicago Transit Authority, Columbia College Chicago, Gateway Foundation and Junior Achievement of Chicago. He helped to found the Alliance of Business Leaders and Entrepreneurs (A.B.L.E.). Jackson and his wife, Rosemary, have two children and a grandson.

See how Donald J. Jackson is related to other HistoryMakers
Donate Now
Click Here To Explore The Archive Today!