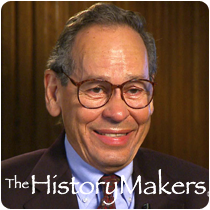 See how Donald Frank St. Mary is related to other HistoryMakers
Donate Now

In 1968, St. Mary was hired by University of Massachusetts, Amherst (UMASS) as an assistant professor in the physics department. His early efforts to build the department and attract research funding to the university resulted in a promotion to associate professor in 1975 and subsequently to full professor in 1983. St. Mary also worked closely to advance the education of minority students. Between 1969 and 1974, he implemented an arithmetic skills course that helped build students’ knowledge of computational analysis. During the summers between 1975 and 1981, he developed a two-week course, “What is Calculus About?” for sophomore and junior level high school students. When the university was in session he directed the Minority Engineering Program which assisted students in the academic support program with their calculus coursework. In 1992, he created and organized the Science Enrichment Program at the University of Massachusetts. The five-week residential program was designed to enrich minority high school student’s’ experiences with science curricula in a college environment.

In 1994, St. Mary was selected by faculty in the department of mathematics and statistics at UMASS to be its principal academic leader with executive responsibility for all aspects of the department, and after receiving approval from from Dean of the College of Natural Sciences and Mathematics he was appointed department head. During his career, St. Mary was awarded research grants totaling $600,000 from the National Science Foundation and the Office of Naval Research. He was awarded institutional grants, all in some manner to support minority students, totaling $7 million from the NSF and the National Cancer Institute. From 1968 to 2002, St. Mary served on the Board of Directors for the Committee for the Collegiate Education of Blacks and Other Minority Students, holding various offices including vice chairman and chairman.

St. Mary is internationally renowned for his research in Computational Ocean Acoustics. He has been invited to lecture in Accra, Ghana, Honolulu, Hawaii, and Dublin, Ireland. St. Mary has authored, co-authored, and edited scholarly works for distinguished publications such as Proceedings of the American Mathematical Society, Journal of Computational Physics, and Journal of the American Acoustical Society.

Donald Frank St. Mary was interviewed by The HistoryMakers on October 8, 2012.

See how Donald Frank St. Mary is related to other HistoryMakers
Donate Now
Click Here To Explore The Archive Today!