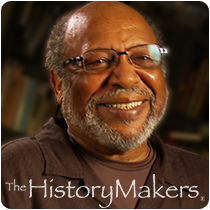 See how Donald Camp is related to other HistoryMakers

Artist and photography professor Donald Eugene Camp was born on July 28, 1940 in Meadville, Pennsylvania to Ira and Martha Camp. He graduated from Camden High School in 1958 and went on to serve in the United States Air Force from 1960 to 1972.

From 1972 to 1980, Camp worked as a photographer for the Philadelphia Evening and Sunday Bulletin. He then returned to school and received his B.F.A. degree in 1987 and his M.F.A. degree in 1989, both from Temple University’s Tyler School of Art in Philadelphia, Pennsylvania. He subsequently taught for two years as an assistant professor at the Tyler School of Art. Then, after receiving a number of artist fellowships in the 1990s, Camp was hired as an artist-in-residence and assistant professor of photography at Ursinus College in Collegeville, Pennsylvania in 2000. Camp retired in 2012 as professor emeritus.

Camp started exhibiting his art in group shows in 1982 and in solo exhibitions in 1989. His ongoing photographic series, Dust Shaped Hearts, began in 1990, and sought to counter stereotypes of African American men. The series has grown to include men and women of all races, acknowledging that the struggle against ignorance and intolerance is universal. Camp’s artwork has been exhibited at the Philadelphia Museum of Art, the Pennsylvania Academy of Fine Arts, the Institute for Contemporary Art, the Delaware Museum of Contemporary Art, and the Noyes Museum; and is included in a number of important public and private collections including the Philadelphia Museum of Art and the Pennsylvania Academy of Fine Arts. His work has also been featured at Gallery 339 in Philadelphia for a number of years.

Camp has been honored for his work with a John Simon Guggenheim Foundation Fellowship, a National Endowment for the Arts Fellowship, and multiple Pew Fellowships. He was a Pennsylvania Visual Artist Fellow four times, and was awarded a Honickman Foundation Grant in 2008. Camp was a founding member of the Philadelphia Association of Black Journalists, and sat on the board of trustees of the Institute of Contemporary Art at the University of Pennsylvania from 2002 to 2005. He was also the subject of an American Artist Oral History at the Smithsonian Institute, and has served on the advisory board of the Creative Artist Network (now The Center for Emerging Visual Artists). He is a member of the Bahá'í Faith and lives and works in Philadelphia.

Donald Camp was interviewed by The HistoryMakers on June 13, 2014.

See how Donald Camp is related to other HistoryMakers
Click Here To Explore The Archive Today!