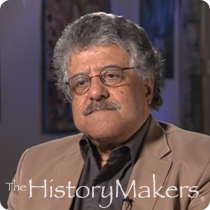 See how Don West is related to other HistoryMakers
Donate Now

Photographer Don West was born November 15, 1937 in Boston, Massachusetts, to Elise and Claude West. West attended Brookline High School, graduating in 1955, before going on to study math at Morgan State University in Baltimore, Maryland. In the 1960s, West studied with Maharishi Mahesh Yogi, and was a professional bass guitarist. He taught transcendental meditation in Detroit, Michigan throughout the 1970s.

In the early 1980s, West became a staff photographer for the Bay State Banner in Boston, Massachusetts, documenting the movements, struggles, and successes of Boston’s African American community. During this period, West worked as a press photographer for United Press International. In 1983, West was the official photographer for Melvin King’s “Rainbow Coalition” mayoral campaign. Also in the 1980s, West regularly documented performers, including B. B. King, Whitney Houston, and Diana Ross, at Boston’s Concerts on the Common. In 1990, West served as official photographer for Nelson Mandela during the South African anti-apartheid leader’s visit to Boston on June 23, 1990. The Museum of African American History on Beacon Hill exhibited his work in the exhibit Portraits of Purpose, which was well-received and featured prominent social leaders of Boston’s African American community. West photographed Governor Deval Patrick’s inauguration in 2007; and in 2009, was a Resident Artist in the African American Master Artists-in-Residence Program at Northeastern University in Boston. In 2012, West founded Blackwire News Service, a wire service for people of color worldwide. The Urban League commissioned an updated version of Portraits of Purpose in 2012. Then, in 2014, West co-authored Portraits of Purpose: A Tribute to Leadership with Kenneth J. Cooper.

West is the founder and owner of Don West Photography. His editorial and documentary work has taken him all over the world, including to Spain, China, Paris, Jerusalem, and the Caribbean. Prominent subjects photographed by West have included Alice Walker, Angela Davis, J. Keith Motley, and President Barack Obama during his 2012 campaign trail in the Northeast. West is a member of numerous organizations, including: National Press Photographers, Boston Press Photographers and National Association of Black Journalists. He has received multiple awards for his contributions in photojournalism, particularly for the City of Boston.

Don West was interviewed by The HistoryMakers on October 19, 2016.

See how Don West is related to other HistoryMakers
Donate Now
Click Here To Explore The Archive Today!