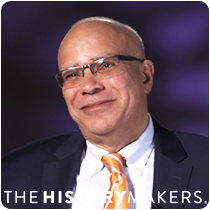 See how Don Terry is related to other HistoryMakers

Journalist Don Terry was born on July 30, 1957 in Evanston, Illinois to Jeanne Katherine Ober and Bill Terry. Terry graduated from St. Mary's High School in 1975, and received his B.A. degree in American history from Oberlin College in 1979. He then earned his M.A. degree in magazine journalism from Northwestern University’s Medill School of Journalism in 1980.

Terry began his journalism career at the Chicago Defender, where he worked as a staff writer. He went on to write for several newspapers in the Midwest, including the St. Paul Pioneer Press and the St. Paul Dispatch. In 1988, Terry joined The New York Times as a staff writer in the metro section. Over time, Terry became a national correspondent, and many of his articles focused on legal and social injustice issues. He also covered subjects ranging from the El Rukns Chicago gang convictions in 1991 to the Los Angeles riots in 1992 to serial killer Jeffrey Dahmer’s conviction. In 2000, Terry’s article, “Getting Under My Skin: A White Mother and A Black Father Left Him This Legacy” was published as part of a New York Times series called “How Race is Lived in America,” garnering Terry and the other reporters the 2001 Pulitzer Prize. From 2001 to 2009, Terry worked as a reporter at the Chicago Tribune. He also contributed to the Chicago News Cooperative and the Columbia Journalism Review; and wrote a weekly column for the Chicago Sun-Times for many years. From 2012 to 2015, Terry worked as a senior writer at the Southern Poverty Law Center. Terry became the national press secretary and communications director at the Rainbow/PUSH Coalition in 2016, working closely with Reverend Jesse L. Jackson.

Terry received several awards over his journalism career, including the Studs Terkel Media Award in 1997 as well as the Chicago Tribune’s Writing Award and the Peter Lisagor Award, both in 2003. In 2009, Terry received an Encore fellowship from the Columbia Journalism Review.

Don Terry was interviewed by The HistoryMakers on February 23, 2018.

See how Don Terry is related to other HistoryMakers