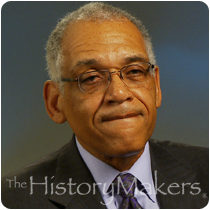 See how Don Cornwell is related to other HistoryMakers

Broadcast executive and businessman W. Don Cornwell was born in Cushing, Oklahoma on January 17, 1948. Cornwell moved with his family to Tacoma, Washington, where he attended Stadium High School. After graduating from Stadium, Cornwell enrolled at Occidental College in Los Angeles in 1965. Four years later, he graduated with his B.A. degree in political science. Cornwell then graduated from Harvard Business School with his M.B.A. degree in 1971.

Cornwell was first hired by Goldman, Sachs & Co. in New York in 1971. By 1980, he was promoted to chief operating officer of the Goldman Sachs’ corporate finance department of the investment banking division. In 1988, Cornwell left the securities firm to found Granite Broadcasting Corporation. In his twenty-one years as the company’s chairman and chief executive officer, the corporation purchased fifteen television stations to become the largest African American-controlled television broadcast company in America. At its peak, Granite Broadcasting generated $169 million in revenue. From 1991 through 2006, Granite was publicly owned with common stock listed on NASDAQ and several issues of debt registered with the Securities and Exchange Commission (SEC). Granite Broadcasting Corporation filed for voluntary reorganization under Chapter 11 of the U.S. Bankruptcy Code in December 2006 and emerged from its restructuring in June 2007. Cornwell stepped down as the company chairman and CEO in 2009.

Cornwell has received numerous honors and corporation directorships throughout his career including serving on the boards of Pfizer, Inc., Avon Products, Inc., American International Group, Inc. and CVS-Caremark Corporation. He is a trustee of Big Brothers Big Sisters of New York. Cornwell was formerly on the board of directors of the Wallace Foundation, the Hershey Trust Company and Milton Hershey School, the New York University Medical Center and the Telecommunications Development Fund. Cornwell’s company, Granite Broadcasting, was named Company of the Year by Black Enterprise. In 1996, he was honored as the Alumnus of the Year by Occidental College; and in 1999, he was the recipient of the Alumni Achievement Award from Harvard Business School. Cornwell is married to Sandra Williams-Cornwell and has two adult children, K. Don Cornwell and Samantha Cornwell.

W. Don Cornwell was interviewed by the The HistoryMakers on May 17, 2012.

See how Don Cornwell is related to other HistoryMakers
Click Here To Explore The Archive Today!