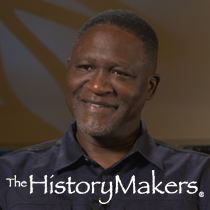 "I Can Show You But I'm Not Going To Tell You."

Basketball player Dominique Wilkins was born on January 12, 1960 in Paris, France to John Wilkins, a sergeant in the U.S. Air Force, and Gertrude Baker. Wilkins had seven siblings, including Gerald Wilkins, who also played professional basketball. Dominique Wilkins’ family eventually settled in Baltimore, Maryland, where he began playing basketball on the playground while attending Dunbar High School. As a high school sophomore, Wilkins relocated to Washington, North Carolina and played at Washington High School. There, he won two North Carolina Class 3-A Championships in 1978 and 1979, and was voted as state MVP in both seasons. Wilkins enrolled at the University of Georgia, where he played basketball for three years, and was awarded as SEC Player of the Year in 1981.

Wilkins was drafted third in the 1982 NBA Draft by the Utah Jazz, and subsequently traded to the Atlanta Hawks. Wilkins was the Hawks’ leading scorer for most of his twelve seasons with the franchise. He was selected to play in the NBA All-Star Game for nine consecutive years from 1986 to 1994, and led the league in scoring during the 1985-1986 season. Wilkins, nicknamed “The Human Highlight Film,” was particularly known for his dunking skills, especially his signature two-handed windmill dunk. He won the NBA Slam Dunk Contest twice, in 1985 and 1990, and placed second two other times. The Hawks qualified for the playoffs in nine of Wilkins’s twelve seasons with the team. Leaving the Atlanta Hawks in 1994, Wilkins went on to play for the Los Angeles Clippers, Boston Celtics, San Antonio Spurs, Orlando Magic and the Greek team Panathinaikos, with whom he won the 1996 Euroleague Final Four championship. When Wilkins retired from the NBA in 1999, he held the ninth position in total points scored in the league’s overall history. The Hawks retired Wilkins’ #21 jersey in 2001; and Wilkins became the team’s vice president of basketball in 2004.

Wilkins was inducted into the Naismith Memorial Basketball Hall of Fame in 2006, entered the Georgia Sports Hall of Fame in 2004, the Atlanta Sports Hall of Fame in 2005 and the National Collegiate Basketball Hall of Fame in 2016. He has worked with former Speaker of the House Newt Gingrich and the National Diabetes Education Program to promote diabetes prevention, and was also active with the Juvenile Diabetes Research Foundation, Cystic Fibrosis Foundation, Special Olympics, Muscular Dystrophy Association and the American Lung Foundation. He is also a diabetes ambassador for Novo Nordisk, a world leader in diabetes care. Wilkins is represented in front of State Farm Arena in the form of an 18,500-pound bronze statue erected in March, 2015.

Dominique Wilkins was interviewed by The HistoryMakers on October 5, 2016.