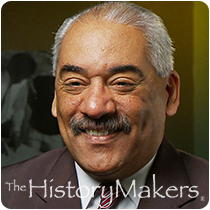 See how Dominic Ozanne is related to other HistoryMakers
Donate Now

Construction entrepreneur and chief executive Dominic Ozanne was born on April 10, 1953 in Cleveland, Ohio to Betty and Leroy Ozanne. Ozanne earned his B.S./B.A. degree in finance from Boston University in 1975. He then attended Harvard Law School, where he was senior comments editor for the Harvard Civil Rights-Civil Liberties Law Review and received his J.D. degree in 1978.

Ozanne worked briefly for the law firm Thompson, Hine, & Flory, after which he joined the Ozanne Construction Company as general counsel. His father had founded the company in 1956, making it one of the nation’s first black-owned construction companies. In 1990, Ozanne was named president and Chief Executive Officer of the company. He expanded the firm beyond the greater Cleveland area and secured a number of significant contracts for projects such as the Cleveland Metropolitan Schools Rebuilding Program, the Orleans Parish Sherif’s Office Rebuilding Program, the Cuyahoga Metropolitan Housing Authority Administrative Campus, and the Elkton, Ohio Correctional Facility.

In recognition of his achievements, Ozanne was awarded the 1991 Engineering New Record Award for Excellence and served as president of the National Association of Minority Contractors from 1989 to 1990. The Ozanne Construction Company was ranked no. 61 on Black Enterprise’s list of the top 100 industrial/service companies in 1998, named the Best-in-Class in Workforce Diversity for middle market companies by the Greater Cleveland Partnership in 2011, and listed in the top 100 Construction Management-for-Fee Firms by Engineering New Record in 2011. The company is a member of the U.S. Green Building Council.

Ozanne is married to Gaile Cooper Ozanne and they have four children; Dominic II, Monique, Olivia, and Joshua. Dominic II has worked as a project engineer at the Ozanne Construction Company’s New Orleans office.

Dominic Ozanne was interviewed by The HistoryMakers on February 13, 2014.

See how Dominic Ozanne is related to other HistoryMakers
Donate Now