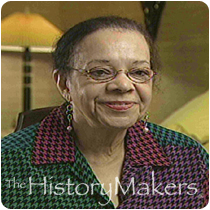 See how Dolores White is related to other HistoryMakers

Composer and pianist Dolores White is a native of Chicago, Illinois. White received her bachelors of music degree in piano from Oberlin College Conservatory, and her masters of music degree in piano and composition from the Cleveland Institute of Music, where her teachers included Ruth Edwards, Donald Erb, and Eugene O’Brien. White completed additional studies with James Friskin of the Juilliard School of Music; at Howard University with Cecil Cohen; at Columbia Teachers’ College with Robert Pace; and at Ohio State University with Thomas Wells.

White held positions at several colleges, universities, and arts organizations, including Wooster College; Hartt School of Music; Cleveland Music School; Karamu House; and the Metropolitan Campus of Cuyahoga Community College, where she served as assistant professor of music. Since her retirement from teaching in 2000, White has continued to compose vocal and instrumental works.

White is the recipient of commissions and grants from the American Society of Composers; the Bascom Little Foundation; Wooster College for the Arts; Cleveland Chamber Symphony; University of Akron Percussion Ensemble; Cleveland Women’s Symphony Orchestra; Cleveland Composers Guild; and the National Women’s Conference of the University of Akron. White was honored by the American Women’s Heritage Society and was selected by the YWCA as a Professional Woman of Achievement in Ohio. Ludwig Music Publishing Company and Boston Music Company publish White's works. In addition to composing, White has conducted numerous workshops and lectures on such topics as women in music, Afro-Cuban music and dance, and African American arts.

See how Dolores White is related to other HistoryMakers
Click Here To Explore The Archive Today!