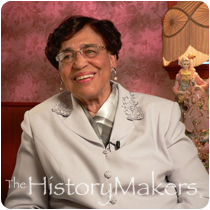 See how Dolores R. Spikes is related to other HistoryMakers

Esteemed college professor and mathematician Dolores Margaret Richard Spikes was born on August 24, 1936 in Baton Rouge, Louisiana to Margaret and Lawrence Richard. She received her elementary and high school education by attending Baton Rouge’s parochial and public school systems. Throughout her youth, Spikes’ parents strongly advocated the value of a college education and upon her enrollment at Southern University in 1954, her father volunteered for overtime hours at his job to help pay for her expenses. She went on to earn her B.S. degree in mathematics in 1957 from Southern University where she was initiated as a member of the Alpha Kappa Alpha Sorority, Inc. and met her future husband, Hermon Spikes.

After graduating, Spikes moved to Urbana, Illinois and pursued her M.S. degree in mathematics at the University of Illinois at Urbana-Champaign. While pursuing her master’s degree, Spikes gained a passion for teaching and decided that she would give back to her community by teaching at a historically black college. In 1958, she returned to Louisiana and accepted a teaching position at Mossville High School in Calcasien Parish. While serving in that capacity, Spikes helped to improve the school’s ratings by introducing independent study programs. Then, in 1961, she returned to her alma mater, Southern University, and served as an assistant professor of mathematics.

In 1971, Spikes made history by becoming the first African American to earn a Ph.D. in mathematics from Louisiana State University. She went on to serve as the chancellor for Southern University-Baton Rouge and Southern University-New Orleans in the late 1980s. Spikes was the first female chancellor (and later, president) of a public university in the State of Louisiana. She was then appointed as a board member of Harvard University’s Institute of Educational Management in 1987, and in 1988, she made history once again when she was appointed as president of Southern University and the A&M College System, becoming the first woman in the United States to head a university system. Later, in 1996, Spikes became the president of the University of Maryland-Eastern Shore where she served until 2001.

Spikes has received numerous awards and recognitions for her accomplishments in academia, including: the Thurgood Marshall Educational Achievement Award and Ebony Magazine’s “Most Influential Black Women in America.” She has also served on the board of advisors for historically black colleges and universities; the board of directors for Education Commission of the States; and the Kellogg Commission on the Future of State and Land-Grant Universities.

Spikes was interviewed by The HistoryMakers on March 27, 2008.

See how Dolores R. Spikes is related to other HistoryMakers
Click Here To Explore The Archive Today!