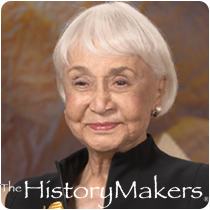 See how Dolores D. Wharton is related to other HistoryMakers
Donate Now

Wharton and her husband, Clifton R. Wharton, Jr., lived in Southeast Asia from 1958 to 1964. Following her return to the United States, Wharton wrote Contemporary Artists of Malaysia: A Biographic Survey, the first academic survey ever written on Malaysian art. Wharton became the first lady of Michigan State University in 1969, when her husband was appointed president of the university. As first lady, Wharton strengthened the university’s relationship with the greater Lansing, Michigan area, and with the student body. President Gerald Ford appointed Wharton to the National Council on the Arts of the National Endowment for the Arts in 1971. She became the first woman, and the first African American, elected to the board of the Michigan Bell Telephone Company in 1974, as well as the boards of the Kellogg Company and the Phillips Petroleum Company in 1976. Wharton initiated and chaired both company’s first social responsibility committees. She was also the first woman, and the first African American, elected to the board of the Gannett Company in 1979. Wharton went on to establish the Fund for Corporate Interns, Inc. (later the Fund for Corporate Initiatives) in 1980. In 1984, Wharton expanded FCI to include the young executives program, a week-long seminar that provided corporate leadership development to minority and women corporate employees.

Throughout her career, Wharton served on numerous other boards including the New York Telephone Company, Tulane University’s board of visitors, The Key Bank National Association, Golub, Inc., the Corporation of the Massachusetts Institute of Technology, NPR, and COMSAT. Wharton was also served on the board of the Michigan Council on the Arts, the Aspen Institute, the Asia Society, CSIS, the SUNY Fashion Institute of Technology, the New York City Center, The Museum of Modern Art in New York, the Glimmerglass Opera, among others. Wharton has been awarded nine honorary degrees.

See how Dolores D. Wharton is related to other HistoryMakers
Donate Now
Click Here To Explore The Archive Today!